There is something about finally booking a flight to Ireland that makes it feel real, like I am actually going instead of just dreaming.  While it is likely that I’ve been planning the trip for a while, when I get those plane tickets, I get so excited—like can’t-sleep-start-the-count-down-can-we-go-tomorrow excited.

But before we buy those tickets, I need to know which airport we should fly into, Shannon or Dublin?  Sometimes our budget wants to dictate the answer, but I’ve traveled enough now to know that saving $100 on flights isn’t always the best option. Each airport has its advantages.  How do you choose?

The Dublin Airport (use the airport code DUB when searching for flights) is located on the east coast just north of city center.  It is a great starting and ending point for trips exploring the city, south east, north west and Northern Ireland. The obvious advantage of flying into Dublin is access to the capital city. You can easily spend a week in Dublin without running out of things to do. 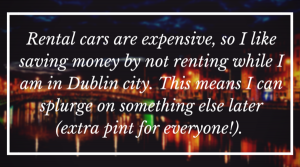 We would never want to drive in Dublin city, especially not in our weary, jetlagged state upon arrival. Instead, we usually opt for the Air Coach bus for transportation into the city center. It’s located just outside the arrivals hall and travels between the airport and various locations in the city center (and back) all day long. With huge compartments under the bus, we never worry about room for all of our bags. The Air Coach is also pretty economical too (if you buy your tickets online, you’ll even get a small discount).

The best part about using public transportation in Dublin is saving money on the car rental for a few days. Rental cars are expensive, so I like saving money by not renting in the city. Then I can splurge on something else later (extra pint for everyone!).

Another advantage of arriving and exploring the Dublin city first is the ability to adjust to the time zone without having to get behind the wheel. It always takes us at least a few days to get over jetlag and it is nice not to feel rushed into a (potentially) stressful driving situation.

When we’re ready to explore, we take the quick half-hour bus ride back to the airport to collect our rental car. Because Dublin is in the top ten busiest airports in Europe, it can get a little congested. However, the M50, one of Ireland’s major highways, is less than three minutes away, so we are usually off to our destination in no time.

Shannon is located just outside Limerick on the west coast of Ireland (airport code SNN). We always fly into the Shannon Airport if our trip covers mostly the west, southwest or the midlands. Shannon gets a few bonus points here; because while everywhere in Ireland is amazing (seriously, everywhere!), the west and the southwest may just outshine the rest. 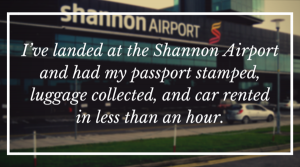 The best thing about the Shannon airport is how quickly you can navigate through it. Customs, rental cars, and security usually require only moments in line (instead of hours). I’ve landed at the Shannon Airport and had my passport stamped, luggage collected, and car rented in less than an hour—the same cannot be said for most international airports.

A big concern for most first-time visitors traveling to Ireland is driving on the left-hand side, but driving around Shannon is a relative breeze. Because the airport is contained in a pretty small area, you’ll have a hard time getting lost, and it will be easier to adjust to the roads. The first roundabouts are just outside the airport and are typically really calm (so you can go around and around as many times as you like).

I usually don’t recommend driving more than an hour (hour and a half max!) on your very first day in Ireland. Luckily, there are some fabulous sites within easy reach from Shannon. The Cliffs of Moher is one of our favorite first-day outings, but Bunratty, Limerick or Galway are also close by.

When departing for an international flight, the common rule is to arrive at the airport three hours before departure time. We love leaving from Shannon because we can extend our vacation one more precious hour since two hours is enough time to check in and get through security/customs.

Which Airport should I choose?

Now that I’ve given you the inside scoop about both airports, you’ll need to decide which one is right for you.  My husband and I have done just about every airport combination you can think of, but we don’t start looking for flights until we have a rough outline of our trip. Your itinerary or where you want to go in Ireland is the number one thing to consider before booking your flights. You don’t need to know exactly what you are doing each day, but you do need to have a general idea of the region(s) you would like to see. If you know this information, you can easily determine which airport makes the most sense. 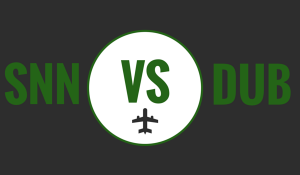 For example, if you’re concentrating most of your time in Dublin city and Northern Ireland, you should fly in and out of Dublin. If you really want to see the west or south west, Shannon will be a better fit. If your itinerary has you seeing a little bit of everything, fly into one airport and out of the other. While this last option could be a little more expensive (or not—just check), it will save you from backtracking where you’ve already been. From our experience, saving time rather than a little money is usually worth it to maximize your experience.

It’s never too early to begin a post-it note countdown (ahem—unless you think 275 days is too early?). This countdown queen needs those tickets in hand, so I begin making plans for our trip as soon as I can. I hope these airport tips inspire you to begin working on your itinerary (and countdown) too.

Today’s article was written for you by Stephanie Chastain of InfiniteIreland.com. Stephanie specializes in Ireland travel for the first-timer, and has a wealth of priceless tips on her blog, where she also offers Ireland Travel Coaching sessions.