Posted by: Liam in Irish Life Leave a comment

I went back and forth on the idea of sending my child to a Gaelscoil later this year when I move back to Ireland. I wasn’t sure if he’d struggle to adjust to learning a new language as well as adapting to a new country at the same time. However, my decision is made, and I’m happy with it. This article by Lora O’Brien re-enforces a lot of the reasons I had in the first place for signing my son up for an all-Irish speaking school…

Most of us will know, or at least know of, a child who attends a gaelscoil. These Irish-medium schools are those which function in accordance with the usual rules of the Department of Education, just like a regular school, except that Irish is the language of instruction and the language of communication amongst teachers, children and management. In short, everybody speaks ‘as Gaeilge’, all the time. To quote the web site of the voluntary national organisation ‘Gaelscoileanna’; “Irish is the living language of Irish-medium schools, both within the classroom and without.”

There were more than 30,000 pupils receiving all-Irish education in 158 primary schools and 36 post-primary schools (outside the Gaeltacht regions) in Ireland in 2006. With the opening of Gaelscoil Liatroma in County Leitrim, on 1st September 2005, all-Irish education at primary level was finally available in every county. The first gaelscoil – Scoil Bhríde, in Ranelagh – opened it’s doors in 1917, and is still one of the 29 primary and 8 secondary gaelscoileanna which operate in Dublin.

What is the attraction of education through Irish? I spoke to parents, teachers and pupils from around the country, to find out…

In Ulster, 23 year old Community Artist Seán Pól Ó Fhlannigáin started attending an Irish nursery school in 1984. The primary school he attended was the only one in Northern Ireland at that time. Bunscoil Phobail Feirste is in west Belfast, where it first opened in 1971. Seán was also a pupil at an Irish language secondary – Meanscoil Feirste, located on Bóthar na bhFal, or the Falls Road as it is more commonly known, from 1991 on. When it first opened it’s doors, there were 9 pupils. There are now over 600. Catering for an eclectic mix of races, religions and creeds, the Meanscoil is described as “a mixed school of non-denominational religion”. 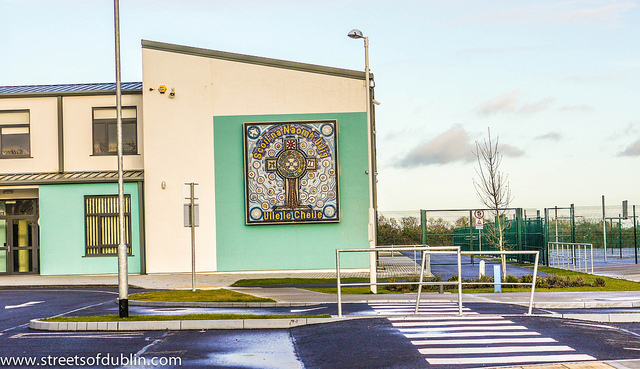 Now receiving grant aid and state backing, Irish language schools in the North have come a long way from their beginnings. Like other gaelscoileanna, the first ones in Ulster were started by determined parents. As well as paying fees to cover the teacher’s salaries, buildings, and equipment, the parents did most other things within the schools. This included driving and supervising on school buses, cooking for the pupils, and cleaning the schools. One resolute family made the journey from their home in Derry to the gaelscoil in Belfast every day, a round trip of 150 miles.

Seán says he knew growing up that his school was different, but that he always thought it to be different in a good way. He would hear his peers complain about their teachers, and give them nick-names – while in his school the teachers were known by their first names. Although discipline was important, there didn’t seem to be the same animosity or rancour between teachers and pupils in the Gaelscoil. His teachers also had huge interest in folk music and traditional sports, and so the extra curricular activities available were rich in Irish culture. He remembers little trouble arising from attending an Irish language school, even though Gaeilge is considered a foreign language in Northern Ireland, and there was a time when speaking it would have said more about your affiliations than your linguistic skills. UK government has now recognised that many of its citizens wish to educate their children through Irish, and has granted financial aid and status accordingly.

Seán finds his extra language skills to be a definite bonus to his teaching career, and he enjoys the ability to express himself in what he considers to be his native tongue. He still meets with friends who are also fluent Irish speakers, and can often be heard engaged in a comhrá when in his local pub.

In Munster, Catriona Ní Fhiachra has a 6 year old daughter, whom she decided to send to the local Gaelscoil Philib Barún, in Tramore, County Waterford. She gives her reasons for choosing this school above others in the area; “There are small class sizes, which is important because it imparts a feeling of family and community. We get a good range of extra curricular activities, and there is better equipment and facilities than in a lot of other schools. There is the option, later on, of my daughter doing her Leaving Cert through Irish, and gaining extra points. And besides the benefits of gaelscoil educated children being able to pick up foreign languages very quickly, because they are used to multi-lingual study – it is important to keep our own language alive.”

Though not educated in a gaelscoil herself, she says the Irish she does have is all coming back to her now. Catriona is very pleased with the caring attitudes of teachers, and with her daughter’s progress in the school. She says she wants her daughter to go to a school where “everybody knows your name.”

In Connaught, Orla Ní Chuinneagáin was interested in gaelscoileanna even before the new Roscommon bunscoil advertised for a principal in 1999. Having written her college thesis on Irish-medium schools, she was already aware of how things operated when she applied for, and won, the position. She explained the process involved in starting up the gaelscoil; “There was a founding committee, of about 6 or 7 people, who were parents or would be parents. Just ordinary local people with an interest in Irish. With the bare minimum requirement of students, and temporary use of the Girl Guide’s centre as a premises, they raised funds through raffles and events, and received loans from parents (which have now been re-paid) to get things off the ground. The committee visited existing schools, and spoke to those who ran them, in Longford and Ballinasloe. The first planning meeting was in October 1999, they advertised for teachers in July 2000, and the school opened in September 2000.” There is no government aid available until there are a minimum of 17 pupils and a premises, and even then it is only a temporary sanction at first – they help with 75% of the rent.

For anybody wishing to start a gaelscoil in their area, Orla offers the following advice; “Talk to parents who have already done it. Look around established schools, and get advice and aid from the ‘Gaelscoileanna’ organisation (www.gaelscoileanna.ie). You will need to apply a year in advance of your proposed opening date. Make sure you have the numbers required, and meet the government standards – they are getting stricter on that now.”

Gaelscoil de hÍde, County Roscommon, moved to a new premises with a long term lease, and proudly opened its doors to 98 pupils in September 2005.

In Leinster, Cillian Ó Síaghail recently graduated from Scoil Oilibhéir in Dublin. Although the school is only 5 minutes from his house, the closest one available, there was just one other child from his housing estate in attendance with him. When asked if he ever got a hard time from other kids about going to a Gaelscoil, he replied; “They just asked me if we had to do everything in Irish. I’d say that we do, and they’d just say – hate that! They thought Irish was really hard.” And yet, having grown up with an older sister and brother who also attended the Gaelscoil, he was quite used to the language and didn’t find it a problem. In fact, he feels quite confident about his future Junior and Leaving Cert exams in the subject. I was dying to know, after his total immersion, did Cillian actually LIKE Irish? His response speaks volumes; “I’m glad that I know the nation’s real language.”

Pádraig Pearse maintained that a country without language is a country without soul – “Tír gan teanga, tír gan anam”. He might rest easier knowing that at least 30,000 children are more comfortable with our nation’s language, thanks to their Gaelscoileanna.

Lora O’Brien is a freelance writer, seanchaí (storyteller), spear fighting living history re-enactor and Irish heritage and tourism professional. She lives in Roscommon, Ireland, with three wonderful children, an incredibly patient partner… (here’s the obligatory ‘pets’ listing of the writer bio)… and a dog and 2 cats and a snake.
You can see her blog, books, and check out the Irish heritage and spirituality info at www.LoraOBrien.com