Shipping a dog overseas – what I’ve learned so far

Posted by: Liam in Moving To Ireland 9 Comments

***update*** I have written up a far more detailed article about this topic on the Ireland Move Club. In it, I cover everything I learned along the way, including a complete cost breakdown (which may shock you), issues I had with the pet re-locator, and some stuff that surprised me during the process. I recommend that you check out the article here if you’re planning moving to Ireland with your dog, especially those of you coming from the US. 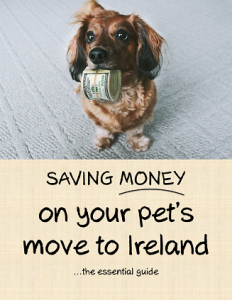 Saving Money on Your Pet’s Move to Ireland, the Essential Guide – Get it here

Anyone who has had the experience of moving internationally with their dog can probably tell you that sending their furry friend on an airplane can be quite a stressful experience. In most cases the dog (or other pet) is a big part of their family and sending them on a plane (or 2) on their own is not a nice thought. But if you want to bring them along, then there are not too many other options available.

I’ve flown dogs before between the USA and Ireland (in both directions) and I would say that flying from Ireland was easier from a paperwork standpoint – there were less restrictions/requirements coming to America than going to Ireland. However, I would say that neither direction was all that difficult. Essentially the rules are laid out for you by the CDC in America (http://www.cdc.gov/animalimportation/dogs.html) and by the Agricultural Department in Ireland (the EU Pet Passport system https://www.agriculture.gov.ie/pets/), and the instructions are pretty clear and easy to follow.
To travel to Ireland from the USA in 2014 my dog has to have a Vet Certificate, be micro-chipped, be up-to-date on her rabies vaccinations and receive a tick treatment a few days before travel. The implications of not satisfying the requirements are quite serious, so if you’re any bit unsure of what you need to do, be sure to get expert help. There are plenty of international pet moving companies out there who are willing to help. You just have to be willing to pay. And, as it turns out, after calls to multiple airlines it appears as though you HAVE to use a third party if you want to send your dog to Ireland from the United States. This wasn’t the case before, and I don’t know why they’ve changed it to be like this.

For my upcoming move
I have yet to choose a dog moving company for this latest trip I’m making. The last 2 times I flew with my animals, I did all the paperwork and airline booking myself. This time though, things are a little more complicated. Unlike the last time where I was able to take one flight direct to my destination point, this time it looks like my dog will need to make a connecting flight. Not what I wanted! I’ll be flying from the west coast of the United States, and the only option is to fly direct into Dublin. From what I understand the only airlines who are approved to fly pets in to Ireland from the US are Aer Lingus and Lufthansa. And (after booking my own airfare from San Francisco) I just found out that Aer Lingus now aren’t accepted animals for transport 🙁

So there’s the first hurdle. My options it seems are to have my dog fly from LA or San Francisco with a stopover in the United States or Europe, and then she would get a connecting flight to Dublin. Not at all ideal, but at least I have options. Another hurdle is the cost of the flight. Unlike the last times my animals flew, this time I am being forced to use a third party. Both Lufthansa and Aer Lingus are insisting on this. I called them up about it, and that’s the stance they have. This will significantly increase my costs.

So far I’ve received 2 quotes from 2 different international pet movers. One is significantly more costly than the other, and as of yet I can’t really see why. The service I requested was exactly the same, so I’m going to need to dig a little deeper to see why the price varies so much. Like I said I haven’t chosen which service I’ll use yet, and am still working on getting other quotes, so I’ll update you when I have more information. Just be sure to shop around if you’re making your own move. It seems most of these pet re-locators offer various levels of service e.g. door to door, door to destination airport etc, so figure out what’s best for you, and what you can afford. In my case I’ll most likely be doing the airport to airport service. Part of that decision is down to the inhibiting cost of full service, but I also want to minimize the time spent without ‘family’ for my dog, so I’ll want to drop her off myself.

Just a quick note about pet moves to Ireland…
If your pet is moving to Ireland, then be aware that you won’t get to pick your animal up at the airport. All pets do have to come through Dublin airport, but once they arrive they are whisked off to Lissenhall Veterinary Hospital a few miles from the airport. Once there, they are checked out, and if everything looks good, are released to you that day.

Have you moved internationally with a pet? If you have any useful tips to share I’d love to hear from you in the comments below.

Don’t forget to stop by the Ireland Move Club and read my far more detailed article on this subject. You can find it here.

Opening a bank account for the first time in Ireland

Deciding what to bring on our international move