Late last year I asked people would they mind sharing the details of their Ireland travel itineraries with us on the site. I had numerous responses (thank you all very much), and I’m just getting around to sharing some of them on the site now. I’m sure they’ll be really useful to anyone planning a first time trip to Ireland, as well as to people looking to find some new places to explore.

This first one, a 14 day Ireland travel itinerary, was sent in by Elizabeth from Minneapolis. Here’s what she had to say…

We flew in and out of Shannon, which seemed to have somewhat cheaper flights. We rented a car from Thrifty (very important advice: get the optional extra insurance).

We stayed in 5 different places; (1) 3 nights in the Boyne Valley near Newgrange (with a day trip to Dublin to see the Book of Kells and other sights); (2) 2 nights in Dingle; (3) 2 days doing the Ring of Kerry with a night in Ballinskelligs; (4) a week in Galway (with day trips to various places, such as Connemara National Park); and (5) during the Galway week, we took a ferry to Inishmore, Aran Islands, and stayed overnight at a fancy B&B very close to Dun Aengus. We stayed in B&Bs except in Galway, where we rented a very cute apartment with a kitchen, laundry, etc. 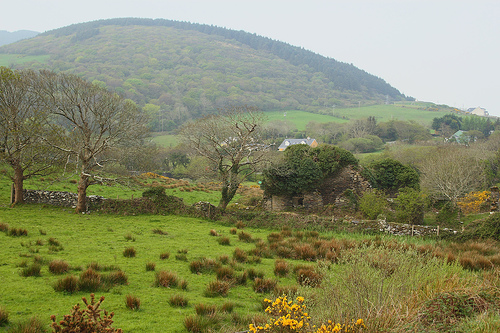 Some of the absolutely best things we did/saw, in no particular order, are: the Book of Kells; renting bikes on Inishmore and seeing the Black Fort and the Seven Churches; on the Ring of Kerry, stopping at Ladies’ View and the Torc Waterfall; hiking around the Dingle Peninsula (starting at the Blasket Interpretive Center); hiring a guy to drive us around the Dingle Peninsula in his van (he took us to a really beautiful little beach that we never would have found) ; going to see the ring forts and castle ruins outside of Cahersiveen on the Ring of Kerry; spending the day at the Neolithic passage tombs in Newgrange and Knowth.

One comment about the Ring of Kerry – all the travel books I read seemed to be concerned about how to avoid getting caught behind a tour bus. We actually found that we LIKED being behind a tour bus – they kind of act like a blocker for you and make driving less stressful! And although it’s true you will then likely be stopping at the same places as the big tour group, they never seem to stay for more than a few minutes at any one place.