Founded in the 6th century by Saint Fin Barre, Cork has grown from what was originally a monastic settlement, to what is now the second largest city in the Republic of Ireland. Since the early 900’s Cork has acted as one of the major trading ports of Europe, aided greatly by the deep water harbour in Ringaskiddy, at the mouth of the River Lee.
With a rich history steeped in religious, sporting, musical and culinary traditions, a tour of Cork city centre is a worthwhile experience for any visitor to the southwest coast.
So grab your camera, and let’s take you on a tour…

Cork City street map in hand, let’s start you off with one of Cork’s most beautiful and eye catching structures – Holy Trinity Church on Fr. Matthew Quay. The site for this church was chosen by Father Theobald Matthew when the nearby Capuchin chapel could no longer facilitate the attending congregation. The foundation stone of the Holy Trinity was laid on 10 October 1832, but due to various complications the church did not open for service until October 1850. This beautiful Cork City church, designed by George Pain, is still in use today. You can find service times at the gate.
For a great photo vantage point, cross the river at Parnell Bridge and walk back down George’s Quay. Come by at night to see this marvelous Georgian-Gothic structure lit up by flood light. Top Tip! Get in close and look up at the entryway arches. You may just spot a couple of dangling stalactites.

Parallel to George’s Quay, and directly behind you as you look at Holy Trinity, you will find Red Abbey Street. Here you will have the opportunity to enjoy what remains of a 14th century Augustinian Abbey, Red Abbey. Unfortunately all that’s left of this protected national monument is the central bell tower of the abbey church. Over the years the Abbey has seen an usual pattern of usage. Once a monastery, the abbey also saw action in the Siege of Cork, and was also used as a sugar refinery, which ultimately led to its eventual downfall. A fire destroyed much of the Abbey in 1799, but what’s left of it is most definitely worth a couple of photos, and a few minutes of your time. 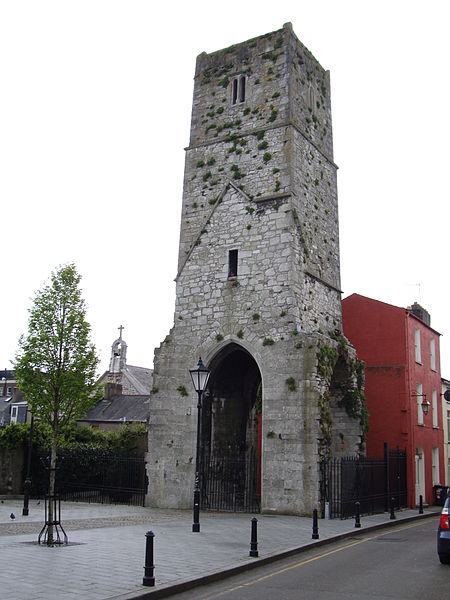 Cross the river using the footbridge on the corner of Grand Parade and South Mall. Just a few hundred feet in front of you, you will see a fountain in the middle of the street. This is Berwick Fountain, or quite simply “The Fountain”, as it is known to Corkonians.
Built in 1860 and designed by Sir John Benson, the fountain is named after Sergeant Walter Berwick who came to Cork in 1847 as Chairman of the Quarter Sessions court.
After more than 140 years, the fountain was removed in 2006, while work was being performed on the Grand Parade, and was returned a year later. Much to the discontent of some very proud Cork folk, the fountain was not repositioned exactly where it was removed from, but the difference in location of its new home is barely noticeable to most.
This fountain is the focal point for late night Cork city revelers. After a night on the town, this area is awash with the youth of Cork, looking for a taxi home, a house party to attend, or something else to keep the night alive.

Next up, a real treat: Cork’s English Market. Literally a stone throw from the fountain, you will find one of Cork’s oldest markets. A market in some form or another has been in place at this location since 1788, with the current structure in use since the mid 19th century. If you’re on the hunt for culinary classics, this is the place for you. Meats, cheeses, breads, seafood and so much more – you’ll find it all at the English Market.
There are at least 3 entrances to the market, all on different streets, but if you enter through the Grand Parade entrance, you’ll be walking in the footsteps of Queen Elizabeth II, who famously visited the market on her state visit to Ireland, in May 2011.

Enjoy a stroll across the remaining section of the Grand Parade. Before you leave this area of the city, you should know that many of the streets around you were once river channels. Can you believe that ships once sailed where you’re walking?
Cross the road at the end of the Grand Parade before the turn that takes you down St. Patrick’s Street, and make your way towards the narrow streets that you’ll find to the left of the McDonald’s restaurant. You’ll find yourself on Cornmarket Street home to the Coal Quay outdoor market. The citizens of Cork have traded their goods on these market stalls since the 1800’s. Don’t expect anything too pretty or elegant on this street, but this trading area is a Cork institution, and you should certainly add a few pictures of it to your photo collection.
If you have time, you may want to hop on over to North Main Street, parallel to Cornmarket Street. Here, you’ll find an odd mix of shops and businesses, but more importantly, this street is home to the church of Saint Peter; the oldest church standing in the city.

Cross the River Lee at the end of North Main Street, and walk up Shandon Street until you reach Church Street. You may want to have your map at the ready, so you don’t miss your next stop… St Anne’s Shandon Church, and the famous Four Faced Liar.
You’ve been walking around Cork City for quite a while by now, so there’s a good chance you’ve heard church bells ringing. A lot of this bell-ringing may sound very random. A lot of it may even sound repetitive, and you might even have recognized the tune of some well known songs. That’s because, Cork City sightseers just like you, having paid the small fee to climb St. Anne’s clock tower, can ring the 8 church bells, and force some sweet (or even unsweet) church-bell music on the city of Cork. A true Cork experience not to be missed.
The climb to the top of the tower is a little challenging. The stairway is narrow, and getting past the bells, originally cast in 1750, is tricky. However the view of Cork City when you reach the top is worth it! Check it out in the video clip here.
Most visitors will be excited at the prospect of climbing the tower, and ringing the church bells, but you don’t want to miss your chance to wander around inside the church. It hosts an amazing collection of books, some centuries old, and you will also find a baptismal font, from the original church of saint Mary’s, dated 1629.

From St. Anne’s your next stop is approximately a 1.8km walk to the east. The Cork City Gaol
This fine 19th century Irish prison first opened its doors to it’s less than enthusiastic guests in 1824. It was used as a jail for almost one hundred years, but since then has been transformed into a remarkable visitor attraction, while in between being used as a broadcasting house, and a storage facility. Around Cork, this jail is often referred to as the women’s prison. The jail did exclusively house female prisoners for a time, but was also used to keep male criminals under lock and key during the early twentieth century Irish civil war.
Like many other Cork visitor attractions, you will find this one to be quite reasonable on your wallet. Be sure not to miss it. More details and tons of photos to enjoy here.

If you’re still on foot at this point, the best way to get to University College Cork is across Cork’s famous ‘Shakey Bridge’ at the west end of Fitzgerald’s Park. After crossing this suspension footbridge, that has been serving Cork’s citizens since the 1920’s, you may want to stop for a break, or a bite to eat, in Fitzgerald’s Park. When the rays of sunshine are finding their way through the clouds, this well-loved park will be buzzing with activity. Kids enjoying the playground, teenagers playing football, young lovers out for a stroll, etc.
Opened in 1849, and educating upwards of 20,000 students per year, a stroll around the grounds of UCC will be time well spent. Take a few pictures of the ‘Long Hall’, visit the award winning Lewis Glucksman Gallery, and you may want to have a wander around the Boole Library, named for the first professor of mathematics at UCC, George Boole.

Staying south of the river, and to the west of the college, you will find Saint Fin Barre’s Cathedral on Bishop Street.
Another of Cork city’s truly remarkable looking churches, St. Fin Barre’s first held service in the late 19th century. Designed by Englishman William Burges, the cathedral is built of limestone from Cork, the interior consists of stone from Bath, and the walls are lined with red marble from the Cork area. Take a tour of the church and enjoy the murals on the church ceilings, the stained glass windows, the 46 foot high Bishop’s throne, the marble floors, the hand carved oak furnishings and the 1870 church organ consisting of an astonishing 3012 pipes. 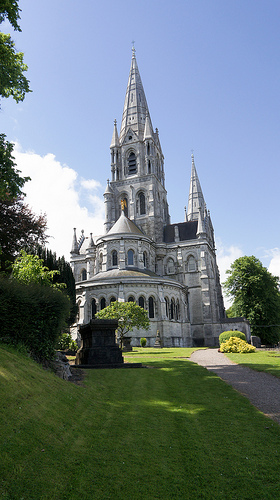 Still on your feet? Great! Let’s take you down to Wandesford Quay via Sharman Crawford Street, where you’ll find one of Cork City’s oldest bridges, Clarke’s Bridge.
Connecting what used to be an area known as Clarke’s Marsh with the city centre, this bridge, spanning a narrow section of the River Lee’s south channel, was built in 1776. That year in history may ring a bell with some of you – yes it’s true; this bridge is as old as the United States of America!

So as not to leave you stranded in this quiet part of the city, why not cross the bridge and keep walking until you hit Washington Street. Turn right, and within 5 minutes you’ll be right back in the heart of the city centre, on the Grand Parade.

I hope you’ve enjoyed this brief tour of historic Cork, but want you to know that there’s so much more to this vibrant city in the south of Ireland. If you want to soak up even more of Cork city, then I recommend spending some time browsing Cork Past and Present and a past post I did on things to do in Cork City.

note: I originally shared this post on another blog as a guest post, but apparently that site has been taken down. I’m re-publishing it here.