A Christmas to Remember in Ireland (Irish Christmas Traditions)

A Christmas to Remember in Ireland

Like many parts of the Western world, Christmas in Ireland is a time of merrymaking and celebration, where gifts are exchanged, copious amounts of food is eaten, drinks are drank and the arrival of Santa Claus is awaited with fervent excitement by the little ones.  Traditionally beginning on the 8th December, the Christmas festivities in Ireland usually last for around four weeks, and during that time, towns from County Kerry to Donegal are bedecked in twinkling lights and festive decorations, as people across the Emerald Isle get into the spirit of this beloved winter holiday.

And yet, behind this seemingly globalised exterior lies a wealth of Irish Christmas traditions that have been passed down from generation to generation of Irish families through the centuries. Today, many Irish families still observe their own individual traditions, which are typified by religion and history. Here at Sykes Cottages, we think that preserving these traditions is important to both Irish residents and the holiday buying public, who travel to Ireland year after year to get a flavour for a traditional Irish Christmas. With this in mind, we’ve come up with a few fascinating facts about Christmas customs in Ireland in the hope that these nuggets of festivity inspire more of us to rediscover our own traditions and values as the Christmas period draws ever nearer!

The plucky Irish sure know how to celebrate Christmas Day. Not content to sit by the fire, play board games and enjoy a glass of Sherry, many spirited locals take a stroll to the nearest beach, strip down to their underpants and take an icy, festive dunk into the Irish Sea on Christmas morning. Most commonly associated with Sandycove near Dublin, this bizarre, age-old Christmas tradition is often done in aid of charity, so that’s kind of a valid justification for such freaky festive behaviour. If you fancy joining the tomfoolery and taking a Christmas dip for yourself, be sure to book a warm and cosy Irish holiday cottage so you’ve got somewhere toasty to dry off after you’ve taken the plunge! 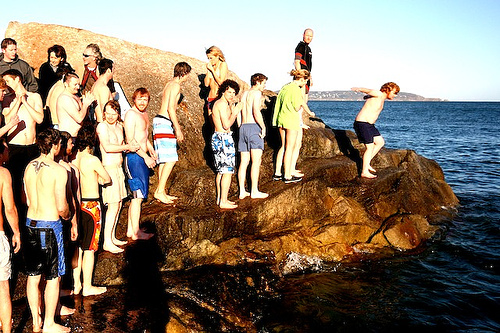 Deck the halls in Ireland

Festooning the home with decorations at Christmas time is common practice across the globe, but none do it as charmingly as the Irish. Visit Ireland during December and you’ll discover millions of cosy cottages, terraced townhouses and modern apartments aglow with natural decorations, glittering fairy lights and warming winter candles. Traditionally in Ireland, a candle is lit and placed in a front window on Christmas Eve as a symbol of welcome to Mary and Joseph so that they could find shelter, although nowadays it is also seen as an emblem of hospitality for any weary traveller who is far from home on Christmas night. So if you find yourself growing a little tired on your Christmas holiday in Ireland, look out for the glow of a candle and know that a warm Irish welcome is at hand should you ever need it!

The Story of the Wren

More commonly known as Boxing Day, the day after Christmas is devoted to a plethora of traditions depending on where you are in the world. Known to the Irish as St. Stephen’s Day, the 26th December is a time to celebrate St. Stephen, the first Christian martyr. One rather unique way that the Irish pay homage to this Christian Saint is by partaking in the The Hunting of the Wrens, an ancient ritual which saw the bird hunted, killed and hung from a holly branch as punishment for betraying the hiding place of St Stephen. Today, no birds are harmed during the celebration of Wren Day. Instead, so called ‘wren boys’ dressed in straw suits march the streets of South Ireland, singing songs and asking for a ‘penny for the wren’. The money raised during the St Stephen’s day celebrations is given to local charities, making the event a popular and worthwhile past time for those wondering what to do when Christmas Day has been and gone.