Home - Featured - Where to find traditional Irish food in Ireland

Posted by: Liam in Featured, Travel Tips, Your Questions 5 Comments

Dorothy, from New England, was recently in touch via Facebook with a few questions before she left for her vacation to Ireland. Like most tourists, Dorothy probably wants to experience a real taste of Ireland while there. She asked:

I would like to try some Irish food and drink…traditional, or popular with locals. What would you suggest?

These days restaurants and fast food outlets are quite popular, but when I was growing up, you rarely went out to eat, and if you did, it was down to the local chipper for some fish and chips. Most people cooked every meal at home and, at least in our house anyway, it was very traditional e.g. stews, soups, oatmeal/porridge in the morning, that kind of thing.

For people of a certain generation, I guess those who grew up before the years of the Celtic Tiger, it remains largely like that. Eating out is still considered a luxury. But when they do, there are plenty of options.

Where to find popular, and traditional Irish food

For breakfast…
Coffee shops, I would say, are a relatively new phenomenon. I’m sure there were some around 10-15 years ago, but not like it is now. Starbucks, Costa Coffee, and other similar businesses, have taken hold of a portion of the breakfast market, but if you’re looking for smaller, traditional, local-type places, they exist too, and in numbers. Just ask someone on the street in whatever town you’re in.
If you’re looking for an “Irish breakfast” you’ll most likely have to stay clear of small coffee shops. Most hotels serve a hot, full Irish breakfast daily, and of course, B&B’s might even be a better choice, in terms of taste and food quality. I guess the advantage with a hotel though, is you don’t have to be staying in the hotel itself to avail of it’s restaurant. There are other options too to get a full Irish breakfast at (see my recommendation below). 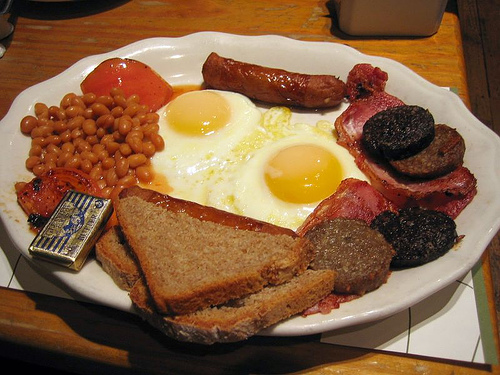 For lunch…
I’m not exactly sure what would be considered a “traditional” Irish lunch, but I can tell you what is very popular with the locals these days: Pub Grub. Basically it’s reasonably priced, nourishing food, which could consist of a variety of things. Fish & chips will of course be on many menus, soups are a mainstay, sandwiches (you’ll hear sangwiches 🙂 ) will definitely be on there, and you’ll find a whole selection and variety of other items. If pub food isn’t your thing, you’ll find plenty of decent restaurants, sandwich shops, ethnic food places etc in most towns. Again, your best option is ask around. People are usually very happy to help.

For dinner…
Dinner is probably the best time of day to experience what some might consider to be “traditional” Irish food. Again, many pubs and most hotels will have something to offer (stews, soups, meat & potato type dishes), but if you are lucky enough to have a little kitchen of your own to use, then why not try to find a local farmer’s market, and pick up some fresh quality Irish food, to cook.
I just popped over to tripadvisor.com and they have literally thousands of Irish restaurants listed with reviews, pictures, price guideline, food category etc. It’s a good starting point and you know you’re going to get mostly unbiased information. If you search Google for something like “places to eat in Dublin” or “places to eat in Cork” (or wherever you’re staying) you’ll find a link to their site which should show plenty of options. 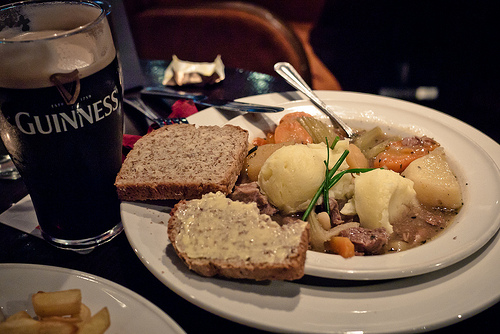 Drinks
Of course Ireland is well known for it’s adult drinks (beers, whiskeys etc), but I’ll leave you to make your own choices there. As an Irish person, I think it’s safe for me to describe us as a little bit tea-mad! Black tea that is. Tea is generally served with a splash of milk, and possibly a little sugar too. If you’re invited into someone’s house, you will most certainly be offered a cup. One of Ireland’s best loved TV shows even had an on-going story-line about it (Father Ted). Some people (not naming any names, Dad) will be seen drinking tea at all hours of the day. It’s like they’re trying to set a record!
Barry’s and Lyon’s are probably the 2 best known and loved brands. If you’re offering me a cuppa, I’ll have a cup of Barry’s Gold Label with milk please…

My Recommendation…
If I had to pick just one place to recommend to you for traditional Irish food, I’d go with Farmgate cafe in the Cork English Market (and no they didn’t pay me to say that 🙂 ). They serve breakfast and lunch, and have an ever-changing menu because what they serve is dictated by what’s available in the market.

I hope this helps. Please, please chime in with your own suggestions. General ideas, or actual specifics (e.g. restaurant names) are welcome. Tell us your favorite spot…