Posted by: Liam in Featured, Places to Visit 5 Comments

By many countries standards Ireland has a lot of unusual looking buildings. Castles, Round Towers, incredibly detailed churches etc aren’t too commonplace in many countries, but certainly plentiful in Ireland. But apart from those types of buildings, we don’t have many structures that you would look at and think, wow that’s unique, or that’s sort of out of place.
So I did a bit of thinking, and a little bit of searching. Here’s what I came up with…

Mussenden Temple
Churches we have plenty, but temples not so much. Mussenden Temple, in Derry, was built as a library in 1785. After many years of coastal erosion, the temple now clings to the edge of a high sea cliff.
You can visit the grounds on which the temple stands, for free, and if you’re lucky enough you may even catch it on a day when the temple itself is open. Be sure to bring a camera along to capture the stunning scenery from the cliffs, and this truly remarkable building. 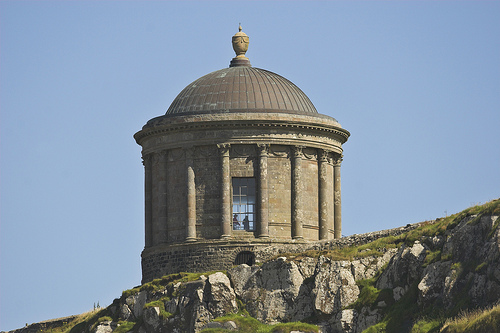 The smallest church in Ireland – Costello Memorial Chapel, Carrick-on-Shannon
This tiny little chapel made my list simply because of its claim to fame as the smallest church in Ireland, and reportedly the second smallest in the world. Measuring just sixteen feet by twelve feet, this chapel was built by Edward Costello as a memorial to his wife. For a time Mass was said in the chapel, but not since the death of Mr. Costello in 1891. To this day the chapel houses the remains of both Mr. and Mrs. Costello. 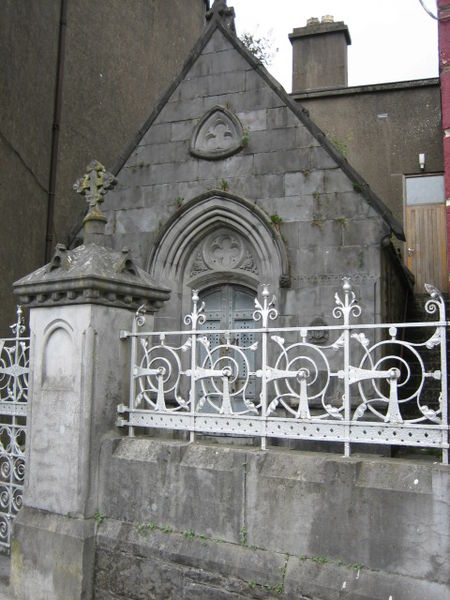 Dromana Gate – The Hindu-Gothic Gate House, Cappoquin, Co Waterford
If you follow ‘Got Ireland’ on Facebook, you may have seen recently that I was looking for a little help finding this unusual Irish structure. I had seen pictures of it in the past, but could not remember it’s name. The story behind Dromana Gate, is that it was originally constructed out of wood and papier mache by the tenants of Dromana Estate, to greet the estate owners on returning from their honeymoon to Brighton. Supposedly they liked it so much, that they had it rebuilt in stone a number of years later. The current structure sure is nice to look at, and most definitely an unusual sight in Ireland.
Thanks to Ireland Travel Kit for the photo. 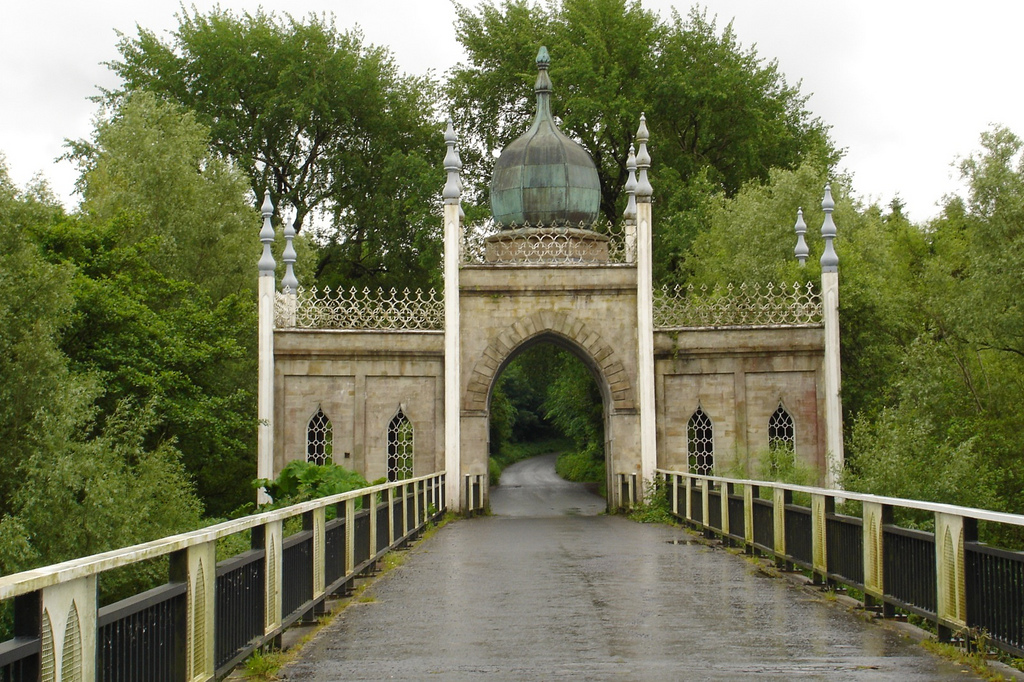 The Towers, Ballysaggartmore, County Waterford
I have never visited The Towers (it’s on the list), but Neil over at Time Travel Ireland wrote up a detailed personal description of his time there, and gives a good account of the history of the site. The Tower’s were built during times of extreme hardship in Ireland, and were constructed more or less as a show of wealth and affluence. It was interesting to read how the grand plans for an extravagant mansion never materialized due to a lack of money. Karma! Neil explains it for you here. 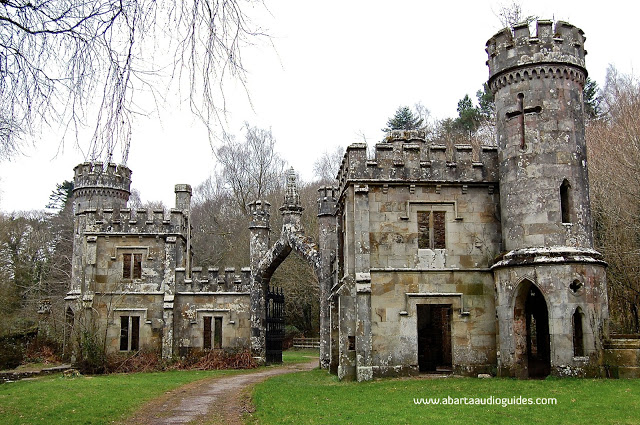 Conolly’s Folly
While researching these structures I got to expand on my vocabulary – 2 new words! Folly (a folly is a building constructed primarily for decoration) and Obelisk (a tall, four-sided, narrow tapering monument which ends in a pyramid-like shape at the top). Conolly’s Folly is an obelisk structure located in County Kildare. Having read an article about this building on Wikipedia, I can tell you it was built for completely opposite reasons as those of The Towers mentioned above. Katherine Conolly, a philanthropic widow, commissioned this folly to provide employment for hundreds of the poor of Celbridge town, when the famine of 1740-41 was at its worst. Sounds like a nice lady! I’m not too sure what purpose, if any, it ever served, but it sure is an unusual looking thing. And before someone corrects me, Conolly (one ‘n’) is the correct spelling for this folly. 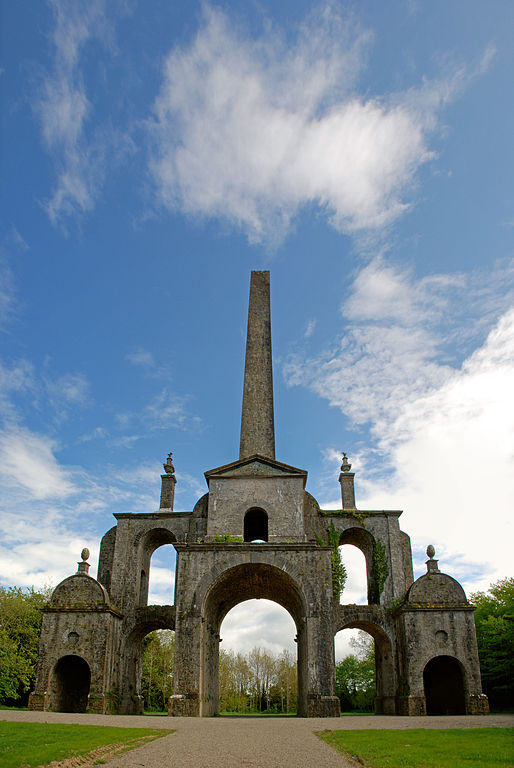 The Wonderful Barn: Leixlip, Co Kildare
Two from the same family! That’s right; The Wonderful Barn is another Conolly family construction. Build in 1743 with a winding staircase around the outside of the barn, it is said to have had more than one use, but it is generally accepted to have been used as a granary. You can find a similar structure in Dublin – the Bottle Tower. Features of the Bottle Tower, e.g. the presence of fireplaces, suggest that people lived in it. 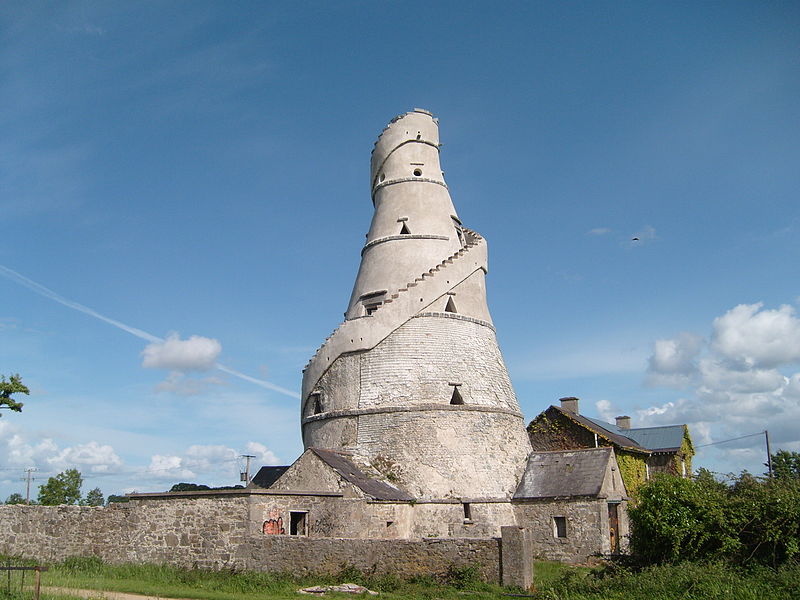 Help me grow the list
I think between us we can at least get this list to “10 unusual looking buildings in Ireland”. Leave a comments below with your suggestions. I’d love to check them out. Thanks 🙂