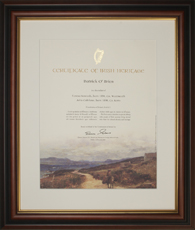 I’m delighted to be partnering with the Certificate of Irish Heritage to bring you this wonderful giveaway.

One lucky reader will win a gift card entitling them to one Certificate of Irish Heritage (certificate only, no frame). The certificate acts as a unique memento which honors the recipient’s ancestor(s) and symbolizes their connection to Ireland. The certificate would make a beautiful addition to your home and will be a great way to proudly show off your direct links to Ireland. You can read more information about the Certificate, and an interview with a certificate holder here.

The fun part – how to enter

For this competition I would like you to tell us a little about the Irish ancestor you would honor on the certificate. Their name and a little about them will do. You can even choose from the list of pieces of information that the Irish government requires when you order your certificate. They ask for answers to 2 of any of the following questions about your Irish ancestor: the town or parish they came from, the year they were born, what year they left Ireland, their departure port, port of arrival, where they settled, or their occupation.
Or, maybe you have a little story to tell about your Irish ancestor. We’d love to hear it. Use the comments section below to enter your details and you’ll be automatically entered into the drawing.

Your entry must be received no later than Thursday May 30th. A winning entry will be chosen at random and notified by email and here on this post.
Good luck!

Well folks…as you can see in the comments below, the entrants to the competition have told some fantastic stories about their Irish ancestors. There can only be one winner though, and that person is:
Julie Gervais Roop

Congratulations Julie. I hope the certificate acts as a wonderful tribute to your great-great-grandmother, Catherine Geraghty.

Thank you to everyone who entered, and thank you the folks at the Irish Heritage Certifiate for sponsoring this giveaway.

Win a copy of “Mythical, Magical, Mystical: A Guide to Hidden Ireland”, by Christy Nicholas