Posted by: Liam in Recipes 2 Comments

I was so happy when I received this Chicken and Cabbage recipe from Jennifer Daly last week. It looks like Jennifer and Erin had so much fun making the dish, and it’s opened up a whole new perspective for me, on how creative you can get when cooking. I must admit, as a novice cook myself, having the convenience of a stove-top takes a little bit of the challenge out of cooking. But seeing how they managed their open fire has given me something new to look forward to trying. Jen and Erin recommend the dish as a campfire meal, but say it can easily be made in a kitchen too. Read on for all the details…

Jen and Erin’s Chicken and Cabbage

We created this recipe while camping so it was originally cooked over a wood fire, but it can be cooked in a traditional kitchen as well.  To get the full effect of the original flavor in a regular kitchen a teaspoon of liquid smoke can be added to the potato and cabbage pot and a ½ teaspoon to the chicken – this is definitely not necessary but the wood smoke does add to the flavor of the food when cooked that way. We wanted to make something really flavorful and both being Irish, so the potatoes and cabbage were a definite. But we wanted something healthier, easier to cook over a fire, and Erin doesn’t eat red meat so we decided on chicken instead of corned beef or lamb. Of course we threw the healthier part out the window by adding lots of butter and bacon.  I (Jen) did most of the cooking while Erin kept the fire at the right temperature for me.  We made this recipe for the two of us after long days of hiking, swimming, climbing, etc but for an ordinary day it would be better for a group of four. 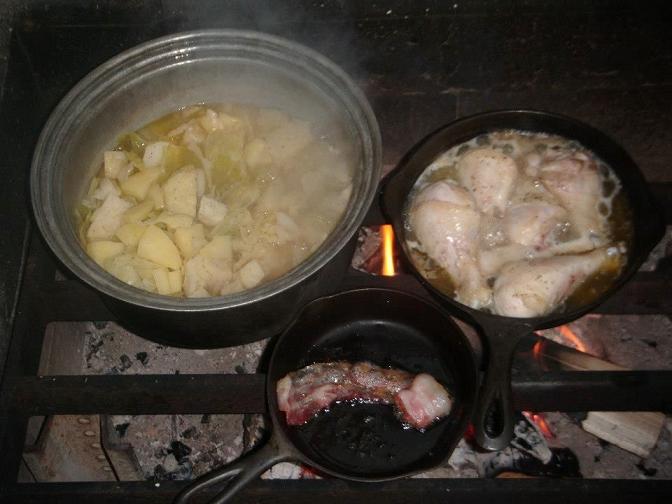 Prep time: 30 minutes (unless you cut much faster than I do which is not fast at all) – Most of this can be done while the previous step is cooking.

A large deep skillet – cast iron is preferable as it imparts iron both for nutritional value and flavor.

A small skillet – cast iron is preferable for this too.

5-6 pieces of chicken – bone in, skin on preferable.  We generally use thighs or drumsticks or a combination.

1 – 2 cups shredded cheddar cheese – we REALLY like cheese so we used 2 cups – the whole package, but it still tastes good with less if you don’t like that much cheese or just don’t have it

1. Put the large skillet and dutch oven on the heat – medium high and let them start to warm.

2. When you can feel heat hovering over the pan – a couple of inches – add 2 slices of bacon to the dutch oven and one to the skillet.

3. While they are cooking slice the onion – I cut it in half leaving the root end on then put a cut through the center without cutting the root end (so it creates quarters) then slice from the top end to the root end – gets it cut in half the time. The slices don’t need to be super thin about ¼ of an inch wide.

4. Keep an eye on the bacon and keep flipping it so it doesn’t burn on either side and cooks through. When it is done pull it out and put it on the plate covered, set aside for later.

5. Add half a stick of butter to each and let it melt, lower the heat a little here (let the fire go down a bit)

6. Chop the cabbage and peel and quarter the potatoes – large ones can be cut into 6 – 8 chunks. Each piece should be 1 – 2 bites.

7. When the butter is melted put about ⅓ of the onion in the skillet and the rest in the dutch oven. (this will probably be in the middle of the chopping and cutting so keep one eye on the stove).

9. Add the chicken to the skillet and sear it on all sides until it has a little brown but not too much – you should turn the heat up all the way to do this. 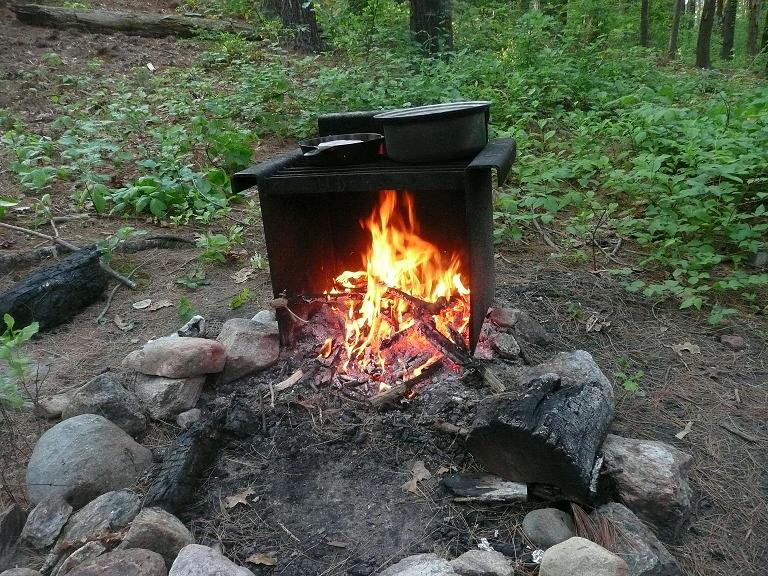 This is what the fire should look like for this step. Notice the steam from the dutch oven

This is what the fire should look like for this step. Notice the steam from the dutch oven.

10. When the onions in the dutch oven are caramelized add ¾ of the can of stock to it and all the cabbage and potatoes.  Fire should remain high. Bring to a gentle boil.

11. Once the chicken is seared on all sides add the remaining stock to the skillet and let the fire start to drop, turn stove down to medium-low once both pots are gently boiling.  Season with salt and pepper to taste – both pots. Cover the dutch oven. Let cook for 30 minutes. If needed you can add water to cover the veggies and so that the liquid is about ¾ of the way up the chicken

12. During the last 10 minutes of cook time start cooking the last piece of bacon in the small skillet. 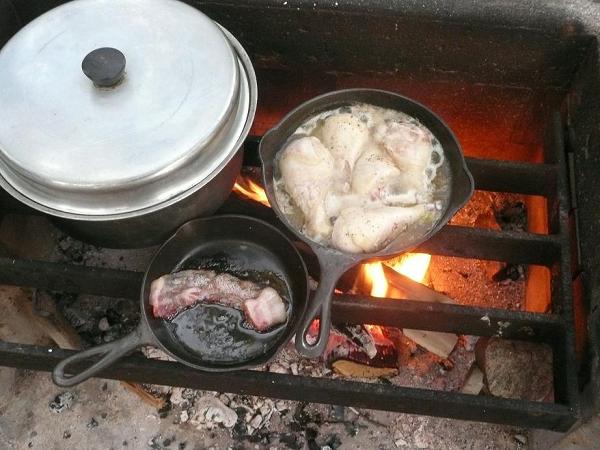 Letting it simmer on a medium low fire

13. For the last 2 minutes, add half the shredded cheese to the veggies and most of the rest to the chicken (you can leave a little out to garnish).

14. To serve put the cabbage potato mix in a bowl or deep plate (the liquid really adds to the flavor so don’t leave it behind!) then put a piece or 2 of chicken right on top adding some of the broth from the chicken skillet on top.  Crumble the bacon over the plate and add some of the reserved cheese (if you chose to set some aside).  I add a quick dash of pepper over it all as well.

You can see the other recipe competition submissions here. And, even though the competition is now over, if you wish to share a recipe on the blog, do please get in touch.

Irish recipe competition – get your entry in now!