Although Scotland is more commonly associated with world class golf, Ireland boasts some epic courses of its own and in some quarters it is actually considered to be the home of the best links courses in the world. Of course the sheer beauty of both the Irish coastline and the tranquil surrounds of the inland countryside lend themselves to the construction of some great golf courses and with so many up and down the Emerald Isle, we thought we’d narrow it down to five of the best. So from North to South, East to West, here are five Irish golfing gems that we think qualify as “Bucket List” golf courses…

The Republic of Ireland is home to a vast array of world class golf courses. Cross the border into Northern Ireland and you will find that while the number of courses is slightly smaller, the quality is just as good. Make your way all the way up the Northern coast and you will find some of the best links golf not just in Ireland but, according to the vast majority of golfing publications, in the world. Included in this group is the famous Dunluce Links at Royal County Down, the home club of Darren Clarke.

Bordered by the towering dunes that typify the shoreline of County Antrim, the golf course was originally conceived and realised in 1888, but the championship layout in its present state owes thanks to the 1947 redesign completed by Harry S. Colt.  All things great about links golf are present here and the course features numerous highlights. The 5th hole, named ‘White Rocks’, is simply stunning and the views from the elevated tee are immense and the 14th, famously known as ‘Calamity’, is arguably the signature hole. This lengthy par 3 that features a terrifying chasm to the right will really get the blood pumping!

As the only course outside of Scotland and England to have hosted the Open Championship, Royal Portrush is not only one of the best courses in the world; it also holds a special place in golf’s history. Royal Portush was also host to the annual Irish Open last year, however, this year, the tournament is heading back to Carton House which is an equally impressive course that last played host to the Irish Open back in 2005 and 2006.

Ballybunion was originally founded way back in 1893 and the supreme quality of its Old Course is still attracting golfers from all corners of the globe today. Set on a patch of duneland that seems heaven sent for golf, the Old Course is bursting at the seams with character and is a supreme test of golf. The dunes are massive and add a sense of drama to the course and there are so many excellent holes, making picking a signature a really tough task.

When the wind blows scoring well isn’t easy but the course is so ruggedly beautiful and fun to play that even a bad score fails to ruin the enjoyment. If there is anyone qualified to sing the praises of a links course such as Ballybunion it is surely links master and five time Open Champion, Tom Watson. Of the Old Course at Ballybunion he once said: “After playing Ballybunion for the first time, a man would think that the game of golf originated here. There is a wild look to the place, the long grass covering the dunes that pitch and roll throughout the course making it very intimidating. In short, it is a course on which many golf architects should live and play before they build golf courses. I consider it a true test of golf.” Enough said.

There are few courses in world of golf that boast as dramatic a location as the Old Head of Kinsale. The promontory on which it sits juts out a full 2 miles into the Atlantic Ocean and is only accessible by a single thoroughfare and the sandstone below was formed some 350 million years ago. Completely surrounded by water and with not one tree in sight, the course is totally exposed meaning the weather, the wind in particular, can often play a big part in your round.

Every single hole at Old Head is an absolutely remarkable experience, making picking a favourite almost impossible. Having said that the holes down by the lighthouse are truly spectacular. This course is absolutely guaranteed to strike awe into those fortunate enough to visit.

This is truly golf on the edge of the world and if you suffer from a touch of vertigo from time to time, perhaps this course isn’t for you! Certain parts of the course are a full three hundred feet up from the water so don’t be surprised to see seagulls gliding below you while the waves rolling in from the Atlantic crash onto the rocks, booming and echoing as they smash into the cave tunnels.

Maintained to the highest standard possible and laid out in an intelligent fashion, you could take this course to a less spectacular setting and it would till rank highly. The dramatic location is simply a bonus! 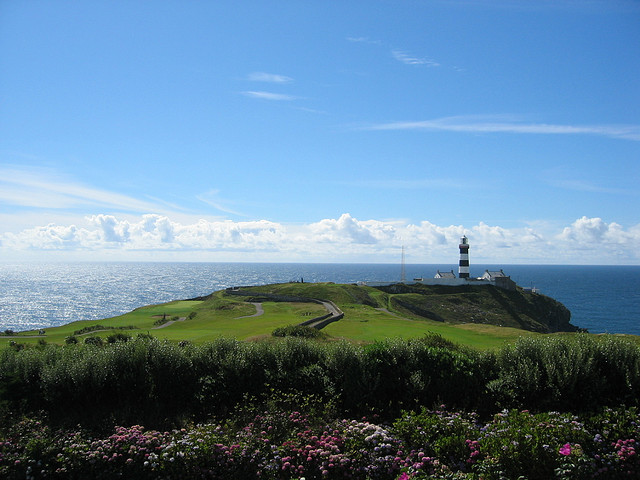 The unofficial title of “the Augusta of Ireland” should be enough to convince any golfer that a round at Druids Glen in Country Wicklow is well worth the effort. The course is absolutely bursting with colour from start to finish. So much so that even if your A or even B game aren’t with you for the day, you can’t fail to enjoy the walk.

Druids Glen isn’t all style and no substance though, as the quality of the course is highlighted by the fact that almost immediately after opening for play in 1995 it was selected to host the Irish Open in 1996. In that year, Colin Montgomerie won the tournament ahead of Irish favourite, Darren Clarke who has actually just been confirmed to play at this year’s tournament at the age of 44.

The ambience here is distinctly Irish, and one of the best things about the course is that, should you find the generously proportioned and always immaculate fairways and greens, going low is a real possibility. Having said that, please don’t arrive on the 1st tee expecting to shoot the course record as there are plenty of dangers out there, not least the seemingly never ending water hazards, should you lose concentration. Druids Glen demands target golf so it is a different animal to the other more rugged courses on this list but the immaculate surrounds and the picturesque nature of the course are undeniable and make for an unforgettable experience.

Look out for ‘Ireland’s Amen Corner’, a trio of holes from the 12th to the 14th which while unquestionably stunning to look at, can be card wreckers should your ball stray from the straight and narrow.

With 27 holes of pure links to enjoy, Portmarnock is rightly considered to be one of the best courses in the world. Within easy reach of Dublin, Portmarnock has attracted the very best of both the amateur and professional game. With a tournament heritage extending from the Irish Open (hosted 13 times) to the British Amateur Championship which it held in 1949, it is easy to see why so many golfers consider this to be Ireland’s finest.

Whether it is stunning par-3’s framed by established dunes or the picturesque views offered across the front nine, Portmarnock is a course which will be remembered by all whom stroll its historic fairways. The history is not only easy to see on the course but exudes from every corner of the clubhouse with great photos of players and tournaments from past and present which adds to the unique experience of playing here. One recommendation when visiting Portmarnock is to enjoy a leisurely lunch in the club’s restaurant, with panoramic views across the course and excellent food it is a great end to a fantastic day’s golf.

Author Bio: Rory is a writer at Your Golf Travel with a keen eye for all things golf. He has been lucky enough to travel far and wide to play the ancient game on some of the world’s best golf courses but is equally happy when hacking it around at his local club. Away from golf he loves sports (more watching than playing these days) and movies but his golf addiction doesn’t leave time for much else!