In Ireland in the 1800s, bread making was a very important part of everyday life. More often than not, bread was made in the house by the housewife; it was never bought from bakeries. Over the many years of bread making in Ireland, two similar breads became the most popular. Soda bread, most popular in Southern Ireland, is made with soft flour and baking soda instead of yeast. Brown bread, more popular in northern part of Ireland, is made the same way but uses stone ground whole grain flour instead of white. Both breads are to this day very popular staples in Ireland and Irish food culture.

While Irish soda bread was not invented by the Irish, it became so popular in Ireland that it is now associated with Irish culture, hence being called an Irish bread. The earliest record of soda bread actually dates back to Native Americans, who discovered that the reaction between baking soda and liquid could be used to leaven their bread. It wasn’t until Irish immigrants went back to Ireland with this knowledge that soda bread became one of the most popular Irish breads.  While baking soda does not work well with heavy flour, it works great with light flour, and makes what is called quick breads.  Soda bread does not even require an oven. 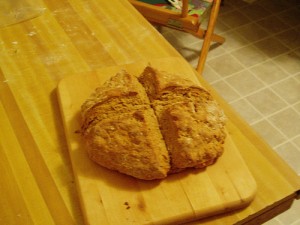 Women would place the dough in a cast iron pot and top called a “bastible” which hung on a crane over the open fire. Traditionally, soda bread has a giant cross on the top. This is said to ‘let the devil out’ while baking, but it also makes the loaf easy to break into four pieces.

Traditional soda bread contains nothing more than flour, buttermilk, baking soda, and salt. Because the ingredients are so simple, people commonly make the mistake of adding ingredients and getting less than perfect results.

For traditional Irish soda bread, follow the below recipe and successfully experience the most popular of Irish breads:

Because bastibles are rarely used today, this recipe calls for an oven. Preheat oven to 450 degrees F. Mix all dry ingredients together in a large bowl. Scoop out a well and pour in about half of the buttermilk. Mix the dry mixture with the milk using your hands and the lightest touch possible. Continue to add the remainder of the milk, but do not allow the dough to become too sticky. Turn the dough onto a floured baking surface and shape dough into a round flat shape. Cut a large cross into the surface (to let the devil out) and place in the oven. After 10 minutes, reduce the heat to 400 degrees F and let bake for another 30 minutes. Remove the bread from the oven and knock on the bottom of the loaf. If it sounds hollow, it is finished; otherwise it only needs another 5-10 minutes.

To turn the above recipe into brown soda bread, simply use 4 cups of whole meal flour and 2 cups of light flour. It’s as easy as that! 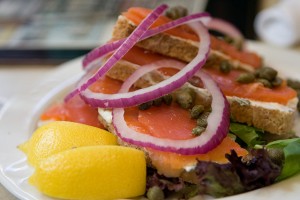 One of my absolute favourite snacks is also one of the easiest to prepare, Irish smoked salmon served on top of freshly baked soda bread. To make this simple dish, simply place slices of smoked salmon (wild is always best!) over the soda bread. Top with red onion, capers and drizzle a little bit of virgin olive oil over it. Add a sprinkle of pepper and voila. An easy, delicious Irish recipe perfect for a snack or pre-dinner starter.

Irish breads, while quite simple, are very tasty and have become a significant part of Irish culture. Both soda bread and brown bread remain two of the most popular Irish breads to this day, and a big part of everyday Irish life.

Download this Traditional Irish Soda Bread Recipe in printable PDF format:
Enda Glacken is a native of Ireland and writes enthusiastically on all things relating to Ireland and jewelry. He is the founder at thecelticjeweller.com, a modern online Celtic & Irish jewelry site. You can find his thoughts and musings at his blog or connect with him on twitter @celtic_jeweller.