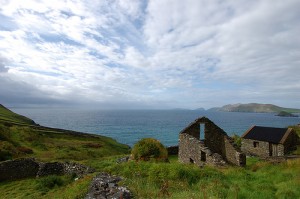 These days, when I’m not living and working in my inner city apartment in London’s Bermondsey, I wake up each morning on Ireland’s Dingle Peninsula. My home here is a stone house built low in the grassy foothills of the last mountain range in Western Europe.

The house has stood for over a hundred years. It was built by men who knew the soft ocean breeze that constantly blows here in summer, the place where spring water rises in the corner of the garden, the depth of the soil and the lie of the land. They knew the fierce, howling gales that lash the peninsula in winter too, hurling foam high into the fields and driving rain in horizontal sheets across the mountains. Like my neighbours here now, they were farmers and fishermen, constantly alert to every change in earth, sea and sky.

I first came here from Dublin as a seventeen year-old student, on a scholarship to improve my knowledge of Irish. As well as the language, I was studying Irish myths and folklore, subjects I’d loved since I was a child. I could have told you that Lugh, the Celtic sun god, appears in Greek mythology as Apollo. I knew that Corca Dhuibhne, the Irish language name for the Dingle peninsula, means ‘the territory of the people of the goddess Danú,’, and that Danú was the Celtic earth mother. And I’d spent hours in my university library comparing and contrasting manuscript stories about the sea god, Mannanán Mac Lír, the Celt’s version of Neptune and Poseidon. So when I arrived in Dingle I thought I knew all about them. But I couldn’t have been more wrong.

On my first day on the peninsula I wandered the roads, loving its green fields, high, wind-blown clouds and towering mountains. Only a couple of hours earlier I’d eaten a huge breakfast at the farmhouse where I was staying, but drawn by the smell of the ocean, and a teenager’s need for chocolate, I found my way to a small shop by a beach. Then, leaving the shop with my chocolate bar, I followed a narrow path above the beach to the edge of a cliff. It looked west to the Blasket Islands. 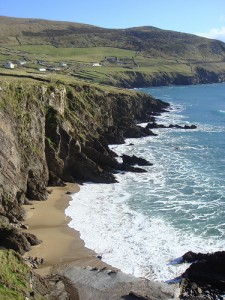 There at the extreme end of the peninsula the play of light between sea and sky is extraordinary. I walked out onto a headland, a hundred feet above the Atlantic waves. The air was so pure that I could see folds in the rocks on the opposite headland, three miles away. The grass under my feet was full of white starflowers, blue cornflowers and pink campion. On later visits I’d walk that way in winter when the waves were like polished pewter and the cliff was battered by storms. But that morning, perched on a rock with my bar of Fruit & Nut, I sat in sunlight. And I thought about Manannán Mac Lír.

There’s a story that describes the god driving his chariot across the waves, his horses’ manes tossing like white foam, and his cloak, woven of mist, changing from blue-green to silver and then to the purple of evening. Sitting under strip lights in a Dublin library, I’d made notes about it. Now, sitting on a rock in Corca Dhuibhne, I watched as the wind shifted the clouds and the islands were furled in mist. Far below me, white foam curled against the cliffs. And blue-green, silver and purple waves were shining at my feet.

Over thirty years later, I remember that moment perfectly. And the sense of revelation that came with it. Sitting on my rock, I suddenly realized that, like the family whose house I was staying in – and the men who built the house where I’m typing this now – the ancient Celts’ lives were dominated by the weather, and the turning wheel of the seasons. They too were farmers and fishermen, acutely aware of the awesome power of the elements. And, far from being primitive or superstitious, they were sophisticated philosophers with subtle creative minds.

That day I had my first glimpse of the meaning of Celtic mythology. Now, living here myself, I can see it more clearly. Beautiful, unpredictable and dangerous, Danú, Lugh and Mannanán represent the numinous, vibrant presence of earth, sky and sea. They’re not quaint superstitions that belong in dusty libraries. They’re powerful, creative images of the uncontrollable in our lives.

Felicity Hayes-McCoy is a professional writer working in print, broadcast and digital media. Born in Dublin, Ireland, she lives and works in a stone cottage in Corca Dhuibhne, Ireland’s Dingle peninsula, and in a inner-city, former factory building in London. She blogs about life in both places on her website felicityhayesmccoy.co.uk. Her memoir, The House on an Irish Hillside, was published by Hodder & Stoughton UK, and Hachette Irl. in June 2012.

Walk to Fitness in Killarney