Oh sure enough, there be no snakes in Ireland to be afear of, but that doesn’t mean the woods are altogether safe. Yer familiar with such classics of Irish folklore as the Leprechaun an’ the Banshee, but have ye ever laid eyes on the Dullahan? Ye’d know if ye had, that’s a fact.

(I can only keep up that Irish-Americanized-accented writing for about a paragraph…and I’m sure that’s also about how long you can bear reading it. So that works out just fine).

Depending on the dialect of the speaker, it can be pronounced ‘DOO-la-hahn’ or ‘DUH-la-hahn’, but this is a terrifying creature, no matter how you slice it. It is, in short, Death itself. Permitted to speak just once on each journey it undertakes, the Dullahan can only call the name of the person whose death it seeks, drawing forth its very soul at the mere utterance. 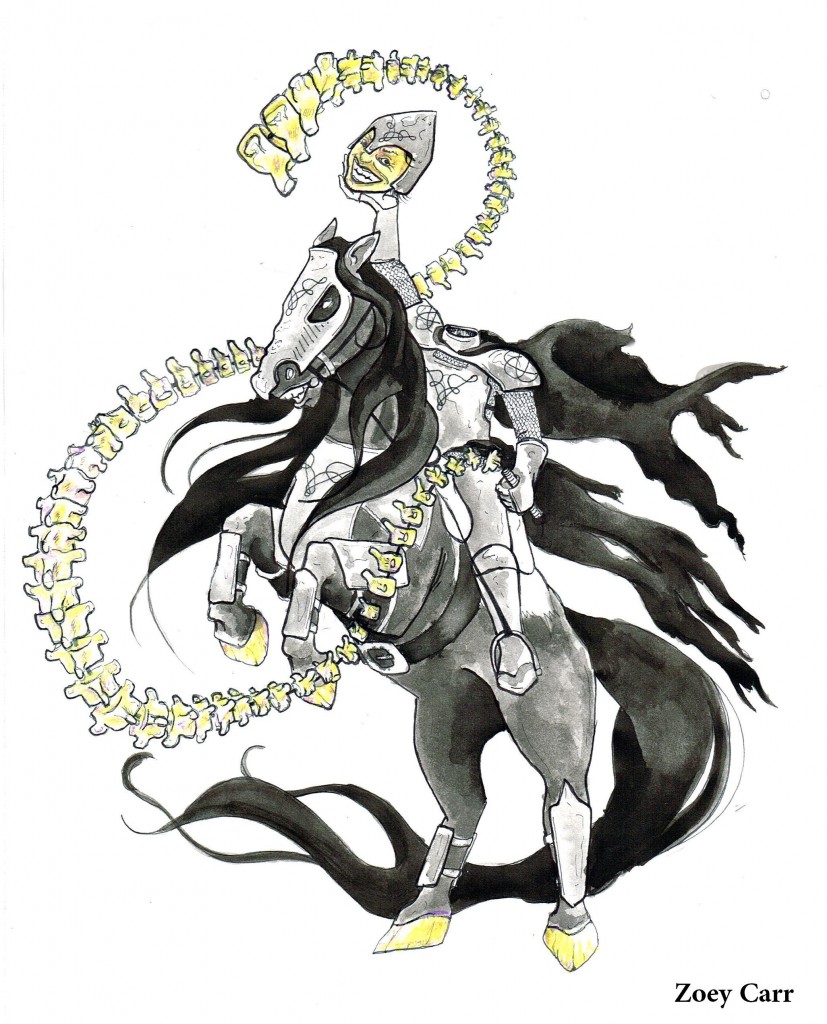 If we were to produce a map of “Faerie Spottings” throughout Ireland, the Dullahan would have a barrage of marks in the counties of Sligo and Down, but its legend is well known all across the island. On particularly dark and cloudless nights, its figure might be seen riding through the Irish countryside at break-neck speed, with a whip made out of human spines, atop a massive black stallion, sparks and flames shooting from the hellish steed’s nostrils. Time and geography have varied the form of the Dullahan, though. In some parts of the country, this faerie drives a huge black coach, known as the ‘coach-a-bower’ (from the Irish ‘coiste bodhar,’ meaning ‘deaf’ or ‘silent’ coach). Drawn by six black horses, and traveling at such an unearthly speed, often the bushes along roadside will catch fire in its wake.

Now, if you’ve seen a figure fitting the aforementioned description, but you are still unsure if said figure is the actual Dullahan, it might behoove you to know that the Dullahan itself has no head…no head attached to its shoulders, that is. This beast carries its head either on the saddle of its horse or upraised in its hand. As if a dislodged body part wasn’t horrific enough, the Dullahan’s head has the color and appearance of ‘moldy cheese,’ and is said to glow with an ‘eerie phosphorescence.’ With a repulsive grin, and small, black, lifeless eyes, it searches for its victims by holding the severed head aloft.  Owing to its supernatural nature, the Dullahan’s head can see for miles, over and through any object, when searching for the person of its intent. 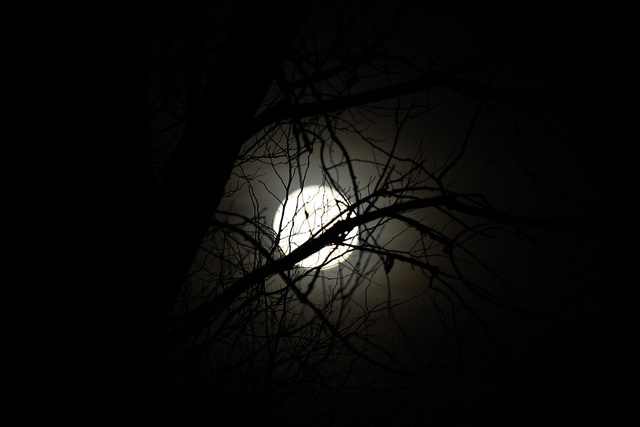 Given that grizzly information, if the creature you’ve seen is the Dullahan, brace yourself, for it’s said not to take kindly to being spied upon by onlookers or passersby. According to legend, best case scenario, you’ll get a basin-full of blood hurled into your face. Worst case scenario, you’ll be struck blind in one eye. But hey, at least it wasn’t you the creature was looking for, right?

Unfortunately, if you are the one the Dullahan seeks, there is no real defense, because it is the bringer of death itself. No mortal is safe from the Dullahan once their time has come. No gate, no lock, no wall can bar it on its gruesome mission. However, it is said that this faerie has an abnormal fear of gold objects and gold jewelry. Even a small amount of gold may suffice to drive the beast off…for a time.

But every myth, every legend, has some root in reality; so too does the Dullahan. It is believed that the origins of the Dullahan are connected to the ancient Celtic god, Crom Dubh, or ‘Black Crom.’ Fifteen hundred years ago, Crom Dubh was worshipped by King Tighermas, who ruled in Ireland. King Tighermas was a big fan of human sacrifice to honor the idols, and it just so happened that Crom Dubh’s preferred means of being “honored” demanded decapitation. Thankfully, human sacrifice (and heathen idols) were frowned upon by the Christian missionaries who came to Ireland from Scotland in the sixth century. Over time, and under the influence of the missionaries, the old sacrificial religions of Ireland began to lose favor. But, as with quite a few of the old gods and idols, ol’ Crom Dubh was more stubborn than expected. There was apparently a quota of souls he expected, and, in order to achieve that, his legend took on the form which became known as the Dullahan, or Fear Dorcha (meaning ‘dark man’), the incarnation of Death itself.

True, the specter of Death has taken on many forms, both in folklore and in literature. Death is unknown, unpredictable, and in most cases, unwelcome. We humans tend to lend our imaginations to the most outrageous images, if our brains cannot make sense of things. Whether seen in the Americanized idea of the cloaked and hooded Grim Reaper, or the Plague Hag of Norway, the Yama of Hindu, the Yanluo of East Asian beliefs, or Hades of the Ancient Greeks, the Irish figure of the Dullahan is not the first, nor will it be the last, in the long list of Death incarnate.

So, sleep soundly tonight, and as we near the end of September… for this was when the festival of Crom Dubh was said to have taken place. As the nights turn cooler, and the moon swells, hanging low and mournful in the harvest sky, no need to strain your eyes searching through the pitch black shadows and swaying silhouettes just beyond in the darkness. Those sounds you hear are surely just the leaves rustling, dry limbs cracking in the wind, owls swooping and field mice scurrying. Nothing more. Phooey and old wives tales. Think no more on the Dullahan.

All the same, perhaps you should draw your curtains and stay inside…just in case.

Alas, if only poor Ichabod Crane had known to carry some trinket of gold, the Dullahan portrayed in “The Legend of Sleepy Hollow” might have been dissuaded, and the story might have ended much more cheerfully… 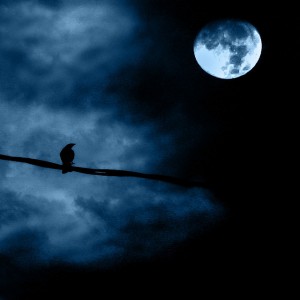 “An opening, in the trees now cheered him with the hopes that the church bridge was at hand. The wavering reflection of a silver star in the bosom of the brook told him that he was not mistaken. He saw the walls of the church dimly glaring under the trees beyond … ‘If I can but reach that bridge,’ thought Ichabod, ‘I am safe.’ Just then he heard the black steed panting and blowing close behind him; he even fancied that he felt his hot breath. Another convulsive kick in the ribs, and old Gunpowder sprang upon the bridge; he thundered over the resounding planks; he gained the opposite side; and now Ichabod cast a look behind to see if his pursuer should vanish, according to rule, in a flash of fire and brimstone. Just then he saw the goblin rising in his stirrups, and in the very act of hurling his head at him. Ichabod endeavored to dodge the horrible missile, but too late. It encountered his cranium with a tremendous crash, –he was tumbled headlong into the dust, and Gunpowder, the black steed, and the goblin rider, passed by like a whirlwind.

The next morning the old horse was found without his saddle, and with the bridle under his feet, soberly cropping the grass at his master’s gate. Ichabod did not make his appearance at breakfast; dinner-hour came, but no Ichabod. The boys assembled at the schoolhouse, and strolled idly about the banks of the brook; but no schoolmaster. Hans Van Ripper now began to feel some uneasiness about the fate of poor Ichabod, and his saddle. An inquiry was set on foot, and after diligent investigation they came upon his traces. In one part of the road leading to the church was found the saddle trampled in the dirt; the tracks of horses’ hoofs deeply dented in the road, and evidently at furious speed, were traced to the bridge, beyond which, on the bank of a broad part o’ the brook, where the water ran deep and black, was found the hat of the unfortunate Ichabod, and close beside it a shattered pumpkin…

The brook was searched, but the body of the schoolmaster was not to be discovered…

The old country wives, however, who are the best judges of these matters, maintain to this day that Ichabod was spirited away by supernatural means; and it is a favorite story often told about the neighborhood round the winter evening fire. The bridge became more than ever an object of superstitious awe; and that may be the reason why the road has been altered of late years, so as to approach the church by the border of the mill-pond. The schoolhouse being deserted soon fell to decay, and was reported to be haunted by the ghost of the unfortunate pedagogue and the plough-boy, loitering homeward of a still summer evening, has often fancied his voice at a distance, chanting a melancholy psalm tune among the tranquil solitudes of Sleepy Hollow.”

~ from Washington Irving’s “The Legend of Sleepy Hollow”