Home - Culture - Music - Artists - Must Be Something in the Irish Water…or the Guinness? 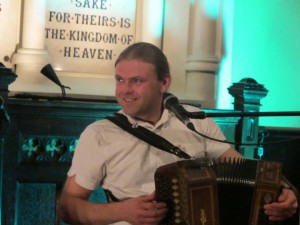 At first glance, he appears as quiet and unassuming as his name. Peter Browne. Average height and weight. Nothing out of the ordinary there. Initially, the thing that stands out is his shoulder-length blonde hair, which falls slightly in his face, almost adding to that shy and inconspicuous demeanor by giving him a place to hide. His eyes might even look wary, careful.

Once you get to know him a little, though, it’s like opening a veritable treasure box.  The eyes behind the blonde curtains of hair are not wary, so much as stealthily observant, and a bit mischievous. The demeanor may be quiet, but trust me, there is a whip-smart brain forming one heck of an internal monologue you’d just love to hear. It’s a quirky, slightly sarcastic sense of wit and humor born and bred in Ireland. As I’ve come to find out, it’s Irish through-and-through.

And once you have the pleasure of witnessing and listening to him play, well, at the very least, you’ll leave the gig with a new appreciation (and love) for Irish Traditional music. Yes. He’s that good. As my husband, a musician, often says, “There are players…and then there are players.” Peter is the latter, to be sure. His talent is hypnotic. Endearing. And unconscious, automatic, like reflex.

Born in March, 1972, Peter is a Dublin native. As with so many Irish musicians, his music began at his own hearth and home.

Q: What instrument do you play? Which is your favorite (and why)?

“The 2 row button accordion is my favorite instrument to play. The reason being, my father played it and there was one lying around the house. I think in order for me not to break his, he taught me some tunes on it, and later sent me to lessons. I also play guitar and a couple of other stringed instruments, and some piano, but it’s still mainly accordion that I’m hired to play. The accordion I play is the most popular type for traditional Irish music.”

Watching Peter playing accordion is a great deal like watching traditional Irish dance. But instead of channeling all of that passion and power and heritage into his feet and legs, it’s all concentrated in his fingers. From the neck up, he could just as easily be holding a pleasant conversation with someone; his fingers seem to have that much of a mind of their own. They fly effortlessly over the buttons and keys. His face exudes a calmness and enjoyment seemingly contradicted by his frenetic hands. Once in a while, you will see a smile, or a laugh, because of some musical “inside joke”…some random or expertly played sequence or note…some interesting choice made by a fellow musician on stage…sometimes even a flub so skillfully recovered from, it tickles all involved, even the audience.

Q: Did you always want to be a musician? Were you taught in school, at home, or both? 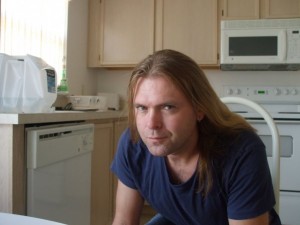 “After I started playing for a couple of years, I knew I wanted to be a musician. Even though I was taught at home first, and had lessons for a few years, to be quite honest, I never listened to anyone regarding the lessons. Being a kid, I kind of lost interest in music at one point, although, I was still listening to a lot of it, branching into classical and other types of music.

When I was 17, I think, someone asked me to play somewhere… and I got paid for it. And I said to myself, ‘I think I can do this.’

Q: But the music was really present from the first at home, right?

“My Grandfather (on my Father’s side) sang as a solo tenor in the London Palladium and around Britain and Ireland, and he also did some recordings he never released. He died when I was about a year old. Father plays piano, church organ and accordion (hence one lying around the house when I was a youngster). My sister and brother play guitar. My Mother learned piano when she was younger, and her sister, my Aunt, is still a piano teacher.

So, music was always in my family. But since I had never listened to the lessons in my youth, I had basically learned everything myself.  And because of that, I had to do a lot of re-learning in my 20s. At age 26, I earned a diploma in Jazz Studies at Newpark Music Centre, which was when the real work started. But it’s a constant learning curve, regardless. Even at this moment, I’m contemplating what to practice after breakfast.”

“I’ve always been interested in music as a whole, not just Irish music. I became interested in classical in my early teens. And then I heard some John Coltrane…immediately fell in love with it… which lead me to by a lot of jazz-based recordings. Around at the age of 26, I saw an opening for a jazz course and dived on it. In learning jazz, you learn harmony in the deepest sense, not just to read the dots from a page. I did primarily to expand my musical possibilities and opportunities.”

Q: Did you have a job offer here in America already, or were you just coming here for new opportunities… to play your music wherever it led you?

“In 2005, I followed up on a print-out of an e-mail a friend of mine had, and ended up working at Walt Disney World in Orlando Florida, for three and a half years. My music now takes me back and forth from the States.”

That was where my husband and I first met Peter, at Raglan Road, Downtown Disney. My life-long and incessant love of all things Irish left me with “slim pickins” here in Orlando. It’s not exactly an Irish immigrant mecca. Sure, there are a few pubs and restaurants, some even actually owned and operated by my beloved Irish folk, but those are not the places a person would go for the full sensory experience, as I found myself daily wanting. So, I’d often drag my husband (he really did go willingly) over to Raglan Road. It’s an Irish pub…on steroids. In the spirit of Patrick Kavanagh, and created in the detail-oriented, larger-than-life, picture-perfect way only Disney can achieve, Ireland truly surrounds you there.

The management is largely Irish (lilting accent and all), the Master Chef (Kevin Dundon) is famously Irish, the thick wooden bars and counters are from Ireland, the pictures crowding the walls and the memorabilia and trinkets in the display cabinets are all little pieces of Irish history and heritage. They brought over a preacher’s pulpit from Ireland, using it instead (in a lovingly irreverently Irish way) as the platform for their world-class Irish dancers. The music stage is even modeled to look as if it is a cozy brick-and-mortar hearth…an oh-so-Irish place, just waiting for a proper Irish jig or reel to erupt.

And so this was the setting in which we first saw Peter. There he was. Hunched slightly over his accordion, hair hanging in his face, fingers setting fire to the buttons. My husband’s jaw dropped. So did mine. Peter and the four-piece band (Tuscar Rock, as we came to know and love them all) wove traditional Irish melodies into complex and beautiful tapestries. And we were hooked.

As our visits to Raglan became more frequent, we got to know the band members, two of whom were even kind enough to play on a few of my husband’s own recordings. They truly became friends of ours. Peter, knowing he’d see us out there eventually, was the one who would usually bring CDs with Irish music he thought we needed to hear. It was Peter who introduced us to our much-loved favorite, Paul Brady, among others.

In terms of “the most apropos places to see a stellar Irish musician,” aside from Temple Bar or the Brazen Head in Dublin, this was pretty much my ideal. Which got me thinking…

Q:  What is the oddest gig you’ve played (and why)?

“Hmmm, that’s a toughie. I’ve played so many places at this point, from the rain forests of Indonesia to crime bosses weddings. It’s hard to know where you might land. I had to arrange and play Chinese music for the Chinese Prime Minister a few years ago (I stole a tune from a Bruce Lee movie). I also played another huge gig in China: a large string section from Shanghai, the national chamber Choir of Ireland, three Irish traditional musicians, three Chinese traditional musicians, a percussionist, and a Brazilian conductor. It was a piece written by a Chinese composer, absolutely way-out stuff, completely modern chaos.

The audience came in the theatre, sat down, and chatted through the entire performance, as if they were sitting in a bar. Many of them also oddly had full-size binoculars to see the musicians on stage.”

Q: What do you miss most about playing in Ireland?

“When I’m away, I miss the festivals, where I end up meeting a lot of people I haven’t seen years. And I get to jam with some great players, people who I wouldn’t otherwise get the chance to play with. “

Q: What do you miss most about Ireland, in general?

“Maybe that complex humour, that kind of goes without saying. Something eerily telepathic about it…”

Hmmm…so that’s where you get it from. 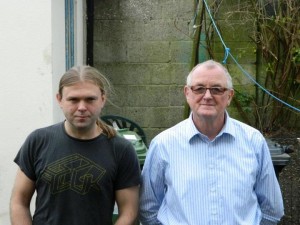 I’m happy and proud to say that Peter Browne is my friend. Yes, his gift is extraordinary…yet, he is not so dissimilar from many other Irish-born musicians making a living here in the United States (well, aside from the Jazz degree). Maybe I’m imagining it, but they all seem to share a profound and breathtaking musical talent and proficiency.  Maybe it’s in the Irish water…or in the Guinness? Maybe it’s such a strong, common, genetic imprint in Ireland that it can be passed down as readily as blue eyes or black hair?

I’ve seen American musicians burn out and get bored with music by the time they reach the age of 45. You can see it in their eyes…their souls have been stripped bare of the music, the joy in it wrung from them like a sponge. But even the Irish-born musicians beaten by age, hands no longer able to grip the neck of the guitar, or the bow of the fiddle, or the cipín (tipper) of the bodhrán (Irish frame drum), still have that glint in their eyes. The love of it, the passion, is still there. The emotions still stir from it. For them, being a musician wasn’t a job, or even a calling…it was part of them, like being right or left handed. Like having freckles. Music was, is, and ever will be, a tangible, palpable part of the Irish people.

So, while you may not have the pleasure of knowing my friend Peter, if you’re in America, you will, no doubt, run into other supremely talented displaced Irish musicians somewhere. Maybe you’ll be lucky enough to see them in a tiny pub, scruffy musicians seated around a sturdy wooden table, crowded with glasses of Guinness, all in various stages of completion. Raucous singing, laughing, clapping forming a lively accompaniment. Watch their playing. Watch their fingers. Watch their eyes. Irish musicians are living history, telling the story of Ireland…no matter where they are, or what type of music they are playing. All you have to do is listen.

And maybe have a pint or two of Guinness in the listening.