Few things can produce a panic in me as getting a flat tire… in a rental car… in the middle of nowhere…in a foreign country. But sure enough, that was the predicament in which my husband and I found ourselves on our first trip to my Mother’s homeland of Ireland. On the N22, mid-way into our drive from Cork to the Killarney National Park in County Kerry, it happened. Truth be told, I was surprised the little Fiat made it as long and far as it had, what with our two suitcases (which could qualify designation as being “small flats” in some parts of Europe) and our seemingly manic and haphazard driving over the previous several days.

Prior to that moment, our trip had been filled with awe and excitement. We listened to RTE and tried to figure out what the broadcasters were saying in Irish. We wondered about the very Irish lives carrying on behind the tiny windows of the very Irish houses we passed. We laughed at the number of flimsy aluminum wheel covers lying forlorn along the twisting, narrow country roads (serving as little, round homages to the driving skill and speed of the natives, and some tourists, I’m sure). Even the herds of sheep, grazing within the ancient low rock walls (which seemingly divided the whole country in a helter-skelter kind of way), made us wonder about the stories their farmers might have. Every sight in Ireland brought forth a marvel, and with every marvel, a question… a history…a story.

As my husband dutifully sprung to action (maybe “sprung” is too generous, and cheerful, a description), I layered on my gloves and scarf and pried myself from our warm little Fiat to help. It was then that I saw it…across the street and in a wide expanse of green field, resting atop a flattened mound of earth. It wasn’t the first I’d seen, but its stark, solitary contrast against the landscape was exceptional.
A castle ruin.

As a native of Louisiana, my husband had fondly said to our friends back home, “You can’t fling a cat without hittin’ a castle ruin in Ireland.” That much was true. It was one of the things I MOST loved about Ireland. In America, we’d have plowed over that field and built a strip mall long ago. A waste of history, that. A waste of a story. Despite how much I wanted to run across that field to touch the stones with my own two hands, soak the history into my pores through some sort of osmosis, unfortunately, time (and tire) were against me. There was no marker, no sign or plaque that made mention of the structure. So, I snapped several pictures, let my mind wander through the past for a few moments, and got back to the task at hand. But for hours afterward, I still wondered about that lone castle still standing resolute in that field.

In the time that has passed since our trip to my beloved Ireland, I’ve researched the photos and notes and “scraps of Irish life” I had collected. Believe it or not, there were only two castles that I had not been able to find record of. This was one of them. And finally, I can pin a piece of antiquity to this landmark. Allow me to introduce you… 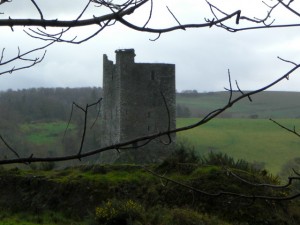 On the N22, between Kinsale and the Killarney National Park, your eyes might happen upon a tall, rectangular, ancient tower in a vast green field. This is Carrigaphooca Castle. In Irish, Caisleán Carraig a’ Phúca, which translates to “Castle on the Rock of the Fairy.” Despite the fact that is it named as a castle, it was actually built as a five-story defensive tower around the year 1436. Positioned on a steep-sided rock (the “rock of the fairy”), it presented obvious defensive and intimidating surveillance of the surrounding lands. While the history is still a bit sketchy, it was most likely built by Donal MacCarthy, but the ruins left standing in that field can more notably be connected to a remarkable person, and tumultuous time, in Irish history.

As you might expect in those late medieval days, the tribes and clans of Ireland were often engaged in internecine warfare, and the MacCarthys of Carrigaphooca were no exception. During the late 1500s, Munster (the greater part of Southwest Ireland) had been devastated by battle with England and English loyalists, and the Gaelic clans had lost over half a million acres of their own island. By the year 1600, the MacCarthys had sided with the Crown. This did not sit well with Donal Cam O’Sullivan Beare, the last independent “O’Sullivan Beare” (a Gaelic princely title) in the Southwest of Ireland. 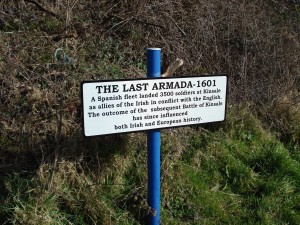 During the Nine Years War, O’Sullivan joined a confederation of Gaelic chiefs, led by Hugh O’Neill, against the English. Early in 1601, their forces had secured support from Philip II of Spain, and together they fought their way toward Kinsale. It was during this time that Carrigaphooca Castle was sacked, the huge wooden door of the castle burned, and the garrison set free. Unfortunately for O’Sullivan, his momentum was halted later that year, when the allied Irish and Spanish forces fought (and lost) against the English in the bloody Battle at Kinsale.

Even after that defeat, Donal Cam O’Sullivan Beare continued to be a resolute force for Irish independence. “O’Sullivan’s March,” so named for the 14 day, 250 mile trek he and his people (men, women, and children) were forced to embark upon after the defeat at Kinsale, was one of the most heartbreaking episodes in Irish history. Marked by enormous suffering and strife, the northward fleeing and starving O’Sullivans sought food from an already annihilated Irish countryside in winter. In Leitrim, O’Sullivan attempted to join with other northern chiefs to fight the English, but opposition finally ended when Hugh O’Neill signed the Treaty of Mellifont. Though he was pained to give up the fight at home, O’Sullivan, along with the few remaining Gaelic chieftains, outnumbered and outcast, fled by ship to Spain, seeking exile. 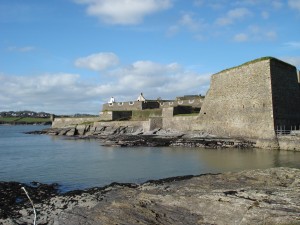 In 1618, O’Sullivan was murdered as he left mass in the Plaza de Santo Domingo in Madrid, by a man reputedly holding a grudge against O’Sullivan’s family and working as a spy for the English Crown.
As fate (and irony) would have it, a little over 165 years later, another O’Sullivan, John, proud descendant of Donal, fought against the English, as a general, for yet another seemingly hopeless rebellion… the American Revolution.

******
I am still searching for the story behind that second nameless castle from our trip. Much like Sherlock Holmes not wanting to rush to the crescendo of a delightful mystery, I refuse to rush my discovery of the last mystery castle. If you’ve ever attempted a search for your ancestors on the internet or in local libraries, you know how frustrating yet exhilarating the chase can be. I suppose I could just call across the pond to businesses in the area and see if they had some random scrap of knowledge or local folk lore. But alas, that would be too easy. The Sherlock in me is not ready to give up just yet.

If you are blessed enough to journey to Ireland, you too will no doubt return home with dozens of pictures of castles, most in various stages of dilapidation. The more severe the state of decay, the more your mind will wonder on the history held in that rock and stone and mortar. You might not be able to find the histories of all the castle ruins you see…I don’t think even the Irish have found all their castle ruins, let alone their histories. My advice to you? Take pictures. Lots of them. You’ll find the stories that go with them, in time. But as Sherlock Holmes (and I) would admit, some of the delight is the thrill of the chase…and given a sturdy little Fiat, with four fully-inflated tires, you can chase marvels and stories till your heart’s content in Ireland.