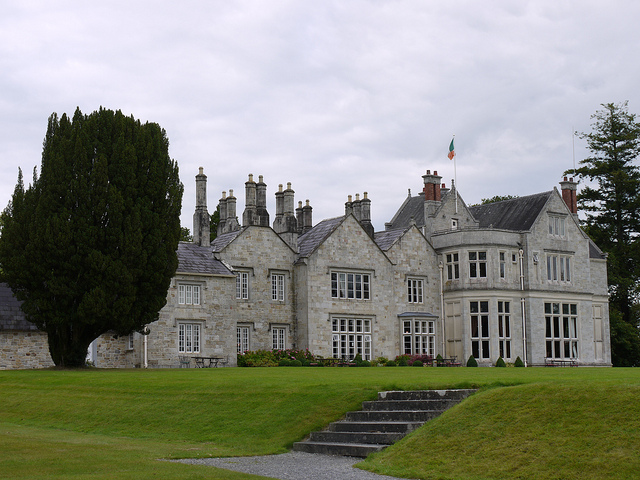 So many people want to get married in an Irish castle – and who can blame them? You’re going to get beautiful scenery, amazing wedding day photos, probably some of the best catering on offer, and you’ll be saying “I Do” in a place of immense Irish historical importance. (image credit)

The following is a list of people in the celebrity limelight what have decided to get hitched in some of our more spectacular Irish Castles.

– In 2002 ex-Beatle Paul McCartney married Heather Mills in Castle Leslie in the village of Glaslough Co. Monaghan.
– David Beckham broke the hearts of millions of teenage girls around the world when he married Victoria Beckham in 1999 in the 1794, gothic Luttrellstown Castle, Ireland outside Dublin.
– In 2011 Bijou Phillips, married actor Danny Masterson in a private Irish castle in County Tipperary.
– James Bond actor, Pierce Brosnan, married television host Keely Shaye Smith at Ballintubber Abbey in County Mayo, and then headed to the 13th-century Ashford Castle for their reception.
– The splendid Kinnitty Castle Hotel was the wedding venue chosen by Irish boyband Boyzone’s Shane Lynch when he married Sheena White back in August 2007.
– Lough Rynn Castle, in County Leitrim was where Irish rugby star Brian O’Driscoll and actress, Amy Huberman got married in 2010.

Would you like to get married in an Irish Castle?

There are options available, but of course like many of the finer things in life, it ain’t cheap! OneFabDay.com has compiled a list of 10 Irish Castles where your dream, fairytale wedding could come true. This is a great place to start. They’ve given a brief summary of each option, including what to expect in terms of amenities and accomodation.

There’s plenty of other options available, so do some research. A quick Google search of “get married in an Irish castle” will yield plenty of search results. You may come across VenueFinder.com in your search. They allow you to search for wedding venues around Ireland and the U.K. and you can even specify a venue type of ‘Castles & Historic Houses’.

Be sure to do a little bit of homework if you are planning on getting married in Ireland. It’s not just a case of showing up, and all will be well. The Irish Registrar of Marriages provided this information to the US Embassy in Ireland to help people understand the requirements needed to be satisfied before getting married.

Dublin Castle: At the very heart of Irish history

Charles Fort video, as seen from The Dock Bar Beach near Kinsale, Cork