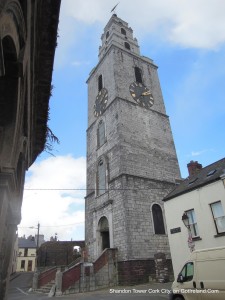 Before getting on my flight back home to Cork this year, I had made up my mind to visit a few places in the city that I had never been to before. There are so many magnificent sights in Cork that have stared me in the face for years, and like many other locals I had never taken the time to pay them a visit.
The Shandon Tower and St. Anne’s church, just a few minutes walk across the River Lee from the city center, was one of those places.

The weather was very typically Irish when I took my stroll across the city to Shandon – stop-start rain showers, interlaced with blazing sun here and there. I was lucky to get plenty of breaks in the rain for the many pictures and video footage I took.

When you get to Shandon, you’ll probably be surprised at the bulky size of the tower, and its imposing stature. No doubt, like me, you’ll find yourself grabbing for your camera and trying to get a good picture of the clock-tower before you go into the church. There are 4 clocks on the Shandon Tower – one on each face. The clock-tower is affectionately known locally as “The Four Faced Liar”, due to the inconsistency in time that can be observed on each clock. 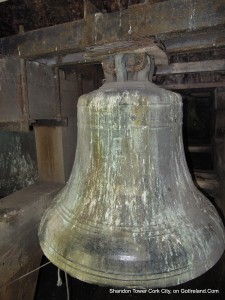 There’s about 10 or 12 stone steps that lead up to the door of the church, and when you go through that door you’ll find yourself in a small lobby where you can proceed directly into the church, or pay a small fee and start your ascent up into the clock-tower. That’s where I decided to go first.

Ringing the Bells
One of the major attractions of the Shandon Tower is that you can ring the church bells – all 8 of them! When you ring these bells they will be heard all over the city. In my younger days I often wondered why church bells would be randomly ringing throughout the day – the bells of Shandon were my answer. The pattern of bell ringing can at times be very random, but often you can hear a familiar tune. The staff at the church have placed a booklet with tunes to play next to the bell strings, which tell you which order to pull the bell strings for the various tunes. I played a couple of verses from the famous Cork song “The Banks Of My Own Lovely Lee”. 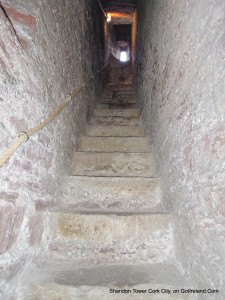 The Climb to the Top
Stone steps, tight squeezes, pigeons and ringing bells – be prepared!
The climb up the tower is a bit of an adventure, but not too difficult to do. There’s really only one spot that requires a little bit of agility. That’s when you need to step through a little opening, past one of the bells and up to the next set of stairs.
The staircases in the tower are very narrow. Passing another person coming in the opposite direction would be a challenge, but for one of you to give in and go back a few steps to allow the other to pass only takes a few seconds.
When you get close to the bells, be sure to put on the ear protection that you will have been given when you paid the fee. At any time, the bells can start ringing, and knowing that they can be heard all around the city, imagine what they sound like when you’re standing a few inches from them!
A few pigeons, who by now must be deaf, have decided to make their home in the bell tower. You can see them fluttering around if you look just above where the bells are fixed. 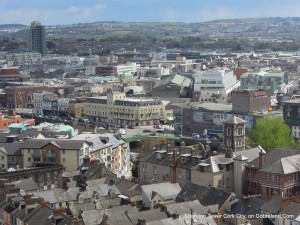 The View
When you get to the top of the tower’s steps you can go through a small door to a balcony that runs right around the outside of the tower. The view of Cork city, from the balcony area above the clocks on the Shandon Tower, is probably like none other in Cork. On a clear day you can see for miles in every direction, and pick out almost any Cork landmark that you are familiar with. The pictures I posted here probably don’t do the view justice, but they give you a fair idea of what you can see from up there. Watch the video below to get a better idea of the panoramic view that awaits you. 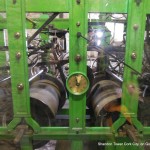 The Clock
There may be four faces to the clock, but inside there’s only one clock mechanism and one pendulum. The clock owes its origins to James Mangan of Cork, and was added to the tower in 1847. Each clock face measures 15 feet, 8 inches in diameter.

The Church
The Shandon Tower may be what catches your eye on the Cork skyline, but the interior of St. Annes church is equally impressive. There’s so much to admire in this very old church. Some of the more notable items include many 16th and 17th century writings, including a bible from 1599. You will also find a Baptismal Font dated 1629, which is a relic from the Church, on the same site, destroyed in the siege of Cork in 1690. 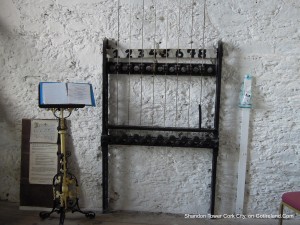 Interesting facts about the Shandon Tower and St. Annes Church
-The name Shandon comes from the Irish, Sean Dun, which means Old Fort.
-Together the 8 bells weigh an astounding 6 tonnes.
-The famous bells in the tower, were cast at Gloucester by Abel Rudhall in 1750.
-The church is built with two types of stone: red sandstone from the original Shandon castle which stood nearby, and limestone taken from the derelict Franciscan Abbey which stood on the North Mall.
-The weather vane at the top of the clock tower is in the form of a salmon.
-The first rector of St. Anne’s was the Rev’d Arthur Hyde in 1772 (Great-great grandfather of the first President of Ireland Douglas Hyde).
-The four-faced clock, made by James Mangan of Cork, was erected by Cork Corporation in 1847.
-An inscription on the clocks mechanism reads: ‘Passenger measure your Time, for Time is the Measure of your Being’.
-The clock pendulum is 14 feet long.
-Each bell has its own inscription. They read as follows:
— When us you ring we’ll sweetly sing
— God preserve the Church and King
— Health and prosperity to all our benefactors
— Peace and good neighbourhood
— Prosperity to the city and trade thereof
— We were all cast at Gloucester in England by Abel Rudhall 1750
— Since generosity has opened our mouths our tongues shall sing aloud its praise
— I to the Church the living call and to the grave do summon all

The Panoramic View from the top of Shandon 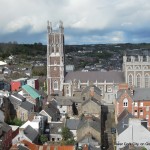 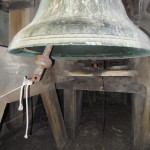 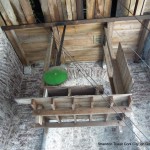 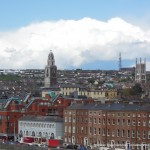 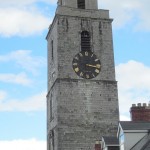 45 things to do in Cork City