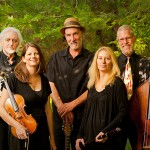 Colcannon is a 5 piece band who have been playing as a group for almost 30 years. Over that time Colcannon has released eight CDs, toured widely across North America, and have been featured on the Emmy®-award winning PBS special, “Colcannon in Concert,” filmed at the Denver Center for the Performing Arts.

The members of Colcannon have been described as “charasmatic” and “a band that never forgets to have fun”. Collectively the band have been called “spectacular” and “traditional entertainers”. Their music has been described as “distinctive, inventive, and contemporary”. Their shows are entertaining, encapsulating, filled with wit and great story-telling.

I recently spoke with Mick, lead vocalist and Bodhran player for Colcannon, and he was happy to share with me a couple of tracks from their most recent album, “Three Days in May,” for you to download. These 2 tunes are but a brief introduction to the very fine music that Colcannon have recorded, most of which can be found and purchased on their website. Colcannon, as mentioned above, tour widely and have a very busy month of March ahead of them. Check out their calendar for full details, but if you’re in Wyoming, California, Colorado or South Dakota in the coming weeks, you’ll have a chance to catch a live performance. Hey maybe you’ll even get to see them this Saint Patrick’s Day in the WYO Theatre in Sheridan, WY. Now wouldn’t that be a treat : )

Watch a recent performance by Colcannon of “Late April Early May”.

Wheels of the World/Man of the House

Free Music Monday is a place where we feature Irish musicians, or musicians who plays an Irish style of music.  Of course, we could not do this without the support of the artists featured on this site, so a big thank you goes out to them.

All music on this website is obtained legally from the copyright holder, to be offered as a free music download.