Posted by: Liam in Artists, Free Music Monday, Music, Spotlight on Irish Talent Comments Off on The Outside Track 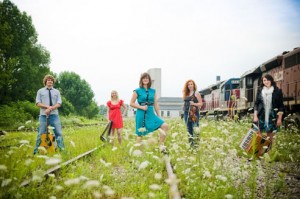 A stunning synthesis of virtuosity and energy, The Outside Track’s marriage of Irish, Scottish and Canadian music and song has been rapturously received around the world. Hailing from Scotland, Ireland, Cape Breton and Vancouver, its five members are united by a love of traditional music and a commitment to creating new music on its foundation. Using fiddle, accordion, harp, guitar, flute, step-dance and vocals these five virtuosos blend boundless energy with unmistakable joie de vivre.

Each player within The Outside Track is a master of their chosen instrument with the band stacking up an impressive amount of international awards, and just recently picked up the ‘Group of the Year’ award at both the Live Ireland Music Awards 2012 and the TIR Irish Music Awards. This amount of talent alone would be enough to recommend the band but in this case the end result is so much greater than the sum of the parts.
The band have enjoyed 6 years of extensive touring in the UK, Europe, Canada and the USA, including appearances at Celtic Connections, Celtic Colours, Goderich, Mission, Memoire et Racines, Sidmouth, and Whitby Festivals.

The Outside Track are:

For more information on The Outside Track, including news, gigs and store, go to their website at http://www.theoutsidetrack.com/
You can also connect with The Outside Track on Facebook here.

While you’re enjoying their music be sure to check out the band’s website.

Note: Both mp3’s are zipped in one file

Free Music Monday is a place where we feature Irish musicians, or musicians who plays an Irish style of music.  Of course, we could not do this without the support of the artists featured on this site, so a big thank you goes out to them.

All music on this website is obtained legally from the copyright holder, or musicians, to be offered as a free music download.