A Little History And Interesting Facts About The Irish Language

In the U.S. people often ask me if I speak “Gaelic”. Gaelic seems to be the word most Americans refer to the Irish language as. In Ireland we simply call it, Irish. Gaelic is actually a group of languages made up of Irish, Scottish and Manx.

Now that that’s cleared up, my answer to people is, yes I speak Irish, but not anywhere close to fluently. And now that so much time has passed since I’ve used it, I’m afraid my understanding as whittled away to just words and phrases, and having an Irish conversation would be beyond my capabilities.

Most Irish people learn the Irish language in school, like a child in the United States might learn Spanish. Unfortunately, there are not enough native Irish speakers for people to learn it naturally. Due to this, most Irish people have an understanding of Irish, but would find it very difficult to hold any kind of conversation solely in Irish.

Why are there so few Irish speakers and what’s being done about it?
The Irish language (Gaeilge) was essentially outlawed under English/British rule, and only survived as the mainstream language in western parts of the country, known as the Gaeltacht. Besides British rule, emigration and famine played a large part in the decline of the language, from which it has never fully recovered. 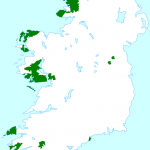 The Gaeltacht areas of Ireland

If you’d like to visit an area of Ireland where Irish is spoken as a first language then the map to your left shows some of the areas that you should go to. Image credit.

In recent years, approximately the last decade or so, some very admirable efforts have been made to increase the popularity of the Irish language, and to encourage its use in every day life throughout Ireland. Examples such as an all-Irish TV channel (TG4), music, Irish speaking toys, books, internet courses and more, have given the Irish language a greater visibility and enhanced its chances of making a stronger comeback than in times past. However, this is hampered by the system used to teach Irish to the youth of Ireland.

As I mentioned earlier, children learn Irish in a school setting, and rarely use Irish at home or in the company of friends. Speaking and hearing a language are proven to be the most effective techniques for learning any language. Unfortunately, adults generally are not equipped to converse with their children in Irish, so learning it naturally is difficult. Of course there are ways to assist with the natural learning process, such as language immersion programs. A lot of teenagers will spend time in the Gaeltacht areas of the country, living with Irish speaking families, and immersing themselves completely in Irish culture. This can help, but like anything, sufficient time needs to be invested for it to pay off. 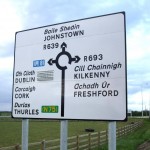 Irish as an official EU language
Even though Irish is spoken by a minority in Ireland, it is recognized as the first official language of Ireland. Irish became an official language of the EU on 1 January 2007. What this meant is that Irish can now be spoken in the European parliament and certain EU documentation must be provided in Irish. As a proud Irish person, I am happy that Irish is given the same recognition in the EU as any other official EU language.

The Irish Language Abroad
Surprisingly Irish is spoken in quite a few countries, and is even taught at third level in colleges in the United States and Australia, and in parts of Europe. With such widespread emigration from Ireland for many decades, the language spread around the world, and has managed to maintain a following of Irish speaking enthusiasts.

Some Irish words you may have seen or heard
Sláinte – Sláinte is basically a toast like the English word ‘cheers’. The literal translation of the word is ‘health’.
Éire/Eireann – The Irish words for the word Ireland.
Tiocfaidh ár lá – used by some Irish republicans, seen on murials in Northern Ireland, meaning “Our day will come”.
Lá Fhéile Pádraig – Saint Patrick’s Day
Craic – Fun, generally involving music, dancing and drinking.
Uisce Beatha – Whiskey. Literal translation is “water of life”.

An bhfuil aon cupla focal gaeilge agat? Leave us a comment below. Thanks.

History of the Irish Language from Údarás na Gaeltachta on YouTube

How Can I Learn to Speak Irish?