What’s happening in Ireland in 2012 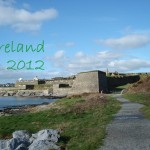 2011 is fast coming to an end, but there are some great festivals and activities lined up around the country for 2012. Whether you live in Ireland and are looking for something to do, or you’re planning a trip to the emerald isle this coming year, our month-by-month slider below will help keep you busy during your time there.

If you know of other festivals or activities going on in Ireland throughout the coming year, we’d love to hear from you. Please leave a comment in the comments section below for our readers to enjoy, and we’ll also add your suggestion to the appropriate month.

Titanic 100 in Belfast, Cobh and Mayo